Not a subject I know anything about but I remember Diane Arbus hers were really striking. Otherwise, I'm going to say "Robert Mapplethorpe " and I'm going to be banned when I post examples of his work.
B

Actually way to many to keep listing, besides doing this professionally for 40 years I've been collecting and have many friends and colleagues who are doing amazing work...

Gilles Peress : Below from "Telex Iran" Most of my favorites already mentioned except Sabastio Salgado but I was thinking about photography last night watching Wes Anderson's French Dispatch. Quite amazing cinematography and I use that term loosely. Many almost still life photos that the actors wandered through but real life stills. The "portraits" were quite amazing! Story a bit weak but entertaining but some scenes were so complex with detail I had to hit pause and let my eye wander over the amazing detail!

WA is a love or hate type director and I happen to really love his work! Watch it for the photography! Favorite?
What a strange idea?
That would be like having a favorite breath, or season, or chord, or part of a woman’s body, or season, or color or food, or sentiment, or flower.
I couldn’t have a favorite photographer but I suppose I prefer all my breaths furthest from my last?
I grew up in darkrooms (funny my “I pad” spellcheck changed the single word to “dark rooms” which is beautifully apt for photography and photographers) of journalists and artists plus painting and sculpture studios and galleries and a newspaper print shop where the old lead type was cast each week by greasy cursing men with funny names like Bezo and Sandy.

Most all the names already listed come up as ones I’ve greatly enjoyed the work of, but I cannot remember names, often even the name of a girl I’m sleeping with week after week.

Aren’t we all photographers?
OK my wife is a painter and you could hold a gun to her head demanding she take a photograph but she would refuse.
Possibly the only time she took any photographs despite me giving her several cameras and an iphone was once she shot me sleeping nude.

After Mapplethorpe died I went to his estate auction at I forget either Christys or Sotheby’s, with my Mother and an ex GF who was a film student at the cooper union.
I cajoled my Mother into bidding on a Joel Peter Witkin, maybe $4000, which she did not win.
I’m not sure his name came up yet?
Witkin is maybe the musician equivalent of Albert Ayler so worth a look if you’re thinking of stretching your view of view.
One of my least favorite photographers really, but I look whether I like or not.

Andy Goldsworthy!
Managed to remember his name maybe because I bought a book.
Who’s that old lady who emerged after her estate junk pile revealed decades of work nobody ever saw?

Seeing the seen unseen is what I see when I see photography.
The reason I take photographs is that if life is 100 and I'm really paying attention I might catch 2-3 but in pictures I see what I didn’t see.
So I can love any photographer really, and there are a lot!
Some need to try harder...

RomanS said:
Ralph Gibson - for his great work with textures and grain in abstract B&W pics.

Elliott Erwitt for his use of humor in street photography.

Ansel Adams for his pioneer work in B&W landscape photography.

Anton Corbijn for his musician's portraits, and his use of lith printing.
Click to expand...

In the stupid hubris of my youth I did not like Adams at all felt that he wasn’t even an artist, but for the purpose of figuring out when taking photographs, what distinguished art from document.
Only when reading his book on darkroom technique did I grok his art in terms of how he scrambled and fought to gouge a greater beauty out of ordinary beauty.

I felt and still feel that any fool or farm animal strapped to a camera with automatic exposure can and will get some great images.
Seems cheap to spend big money hauling gear to spectacular views in order to claim those views as your art?
Now I’m at least convinced that I’m less of a fool now than then!

I’ve been pretty well awed by some cinematographers ability to string together a virtual million great photographs.
Some really do that as they set up and animate each scene.
Of course it helps that they hire 500 staff working 12 hours a day for a year to accomplish that but still... Is there or has there ever been a photographer like Shōji Ueda? Every so often I become compulsively obsessed with his work. It's stark, vast, beautiful, wanting, thought provoking, there's a sense of sad wanderlust, but also hope. Is it just me? Anyone else here rek-o-nize the impact of...

There’s a couple of Japanese schools of photography I like and have some books of but can’t recall names now.
Some seem to all be shot out the window of moving cars, as if the artist is unable to connect to their own world aside from fleeting nails on the chalkboard as they pass.
I can relate in many ways, sort of like society is full of robots pretending recognition yet deeply alienated from one another.

Visions of Light, from 1992 but still amazing 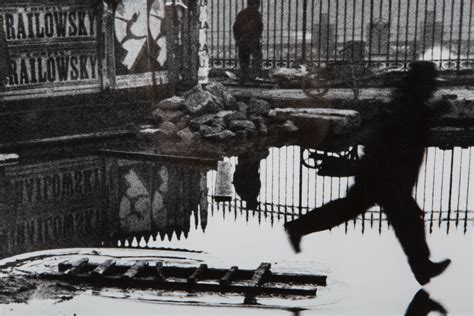 I didn't notice much mention of Cartier- Bresson?
Looked at a lot of his work.

Damn you're a sneaky pup this wasn't here when I posted Mr C-B!