Eighties Fender Japan necks always had the best feel for me, but what vintage Fender necks were they based off?

And here's the reason why they feel so perfect for me. The way the neck flows into the headstock, it's just the most comfortable thing ever. 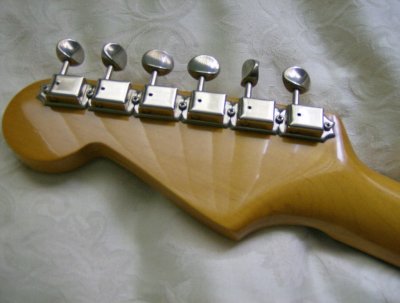 A 1982 Squier showcasing that neck into headstock curve.

And here's a modern day one where they apparently didn't bother anymore.

The transition of the neck into the headstock is much blockier.

But I wonder, what neck profile were the good people at Fuji-gen working off of? What Vintage Fender was used as their example? I'll have to dig my 1983 MIJ Fender Squier Strat out of the storage tomorrow to compare. I've mentioned here before, back in 1990 or so when I got the guitar, I liked the slimmer necks. Over time, I came to realize the advantages to big FAT necks......so the Strat just doesn't get played.

Other than the high end reissues that actually replicated Fender models, I wouldn't assume Fender neck profiles were replicated on the other 95% of the models: those were just cosmetically similar to '54, '57, '62, etc. No one has uncovered any Fender documentation that shows what was spec'd and ordered.

I doubt you even tried 1 percent of what came out of that country at that time.

And I doubt even more that you could tell any difference between the ones that did come out of that country at that time.

I know what you mean but my neck of choice is from a 1980 Lead II. No, I haven't tried 1 percent of them but I have tried and own 3 and they are wicked perfect for me.
T

No commercial affiliation but I like Mighty Mite necks with a C shape. They fit the neck pocket perfectly and I like the contour. I especially like the 21 fret Telecaster neck.Stewmac even sell ones with a Fender logo at a high price. I don't know how the IP laws stand in the USA but there you go.

Well gee I haven't tried them all either... but I gave away the neck on an MIM CS50s and replaced it with an 'E' MIJ neck that is just sublime. So add that useless anecdote to the pile.

Here's a shot of my mid '80's 62 Custom Tele RI. You don't see much because it's a nicely rounded transition. But I'm confused by the comment that the transition would make a neck so comfortable, there aren't many chord grips that are affected by it.

I agree my neck is very comfortable, and consider it a thin neck compared to most Fender necks. What era? I've played some '60's originals that had slim necks, but not sure if they were as thin. The late '80's AVRI 52 models have a wonderful slim neck.

The '70's Fenders don't get the ridicule they once suffered, but I've played many and have never played one that didn't have a great neck.