Does a modern Deluxe Reverb exist?

For the volume problem, you could go with a less efficient speaker. Something like a Weber DT12 would probably make you lose a couple notches on the volume knob, which could be all you need.

As for the FX loop, I've never encountered one that didn't detract from the amp. To my ears, they always deaden the sound a noticeable amount.

Sounds like you're mostly happy with the Deluxe Reverb, I would say just use that and try the quieter speaker.
M

Wally said:
the hot channel in the SuperSonics was drawn out of the Pro Sonic circuit. The Pro Sonic is one of the best Fender amps of all time, imho…..certainly the best since 1985. It has superior build quality to any regular production amp since 1985. Very versatile. I would buy a used Pro Sonic before buying any current Fender. Ommv.
Click to expand...

I've yet to play one and based on your recommendation for my Superchamp which is still my go to, I'd probably 'greewithyou.

Might be a bit much for the OP powerwise I was thinking, if he's using an attenuator with a DR. But I guess he could always use it in 30 watt mode with a less efficient speaker.

The SS22 - apart from a few quibbles re: the reverb cable and the footpedal size is a great unit. Extremely versatile.

Oh - and the stupid tube cage which contacts the butterfly clips on the power tubes and rings sympathetically. We just took it off - the tubes are protected by the back panels like an old DR.
Last edited: Jun 24, 2022

I have an original 1968 Deluxe Reverb, with blackface circuit. Put a Jensen P12N into it as the old speaker just sounded tired. Sparkling cleans, crazy good breakup. Switch between the Jensen and an Avatar/Fane 65 that I have in a 1x12 cab. Insane range of sounds between the two speakers.

(edited: for some reason quotes don't always work when I post, hmmm.....)

digitalMagnetics said:
The Deluxe Reverb is my favorite amp in the world. Like everybody else, I love the cleans. But unlike a lot of people, I absolutely love the overdriven tones my DRRI provides! Anybody can play a Les Paul with 'buckers through a Marshall and make it sound like rawk. But to my ears, there's nothing quite as pleasing as an SG or Les Paul running through a Deluxe Reverb with the volume set to between 6 and 7. It's a gnarlier, grittier sounding distortion than you get with a Marshall or a Vox. It's got a raw, but more complex character that I guess is a bit of an acquired taste for some. For me, nothing beats it.

That being said, I still have gripes about the DR. It's an old school amp. There's no 'verb on the normal channel (I modded mine to address this, thankfully). There's no effects loop. I almost always have to use an attenuator if I want to get it to the sweet spot for drive. Two footswitchable, MV-controlled channels would also be nice. And though it's less of a big deal, The DR only has a 2-band EQ instead of a 3.

I tried the Mesa Boogie Fillmore amps (got a new one right now, although I'm going to return it), but they didn't do it for me. The cleans are outstanding, but the driven tones are 100% tweed, not the blackface/silverface sound I love. I'm not a fan of the tweed thing at all. I know everyone else loves tweed distortion, but to me they sound overly compressed, mid-forward, and mushy.

Is there such a thing as a modern Deluxe Reverb? Something like the Fillmore would check all of my boxes if the driven tones were more blackface and less tweed. I know about the Allen Accomplice, but I don't have much interest in the footswitchable RAW thing if it just gives the amp a tweed-like distortion.
--

ALSO: If you see any of my recent posts praising the Tone Master, know that I gave up on it. I thought it was cool for about a month until I went back and played my real DRRI again and experienced the difference!
Click to expand...

If you can find one, the Pro Tube, Pro Reverb 50W 1x12. Fantastic amp which I gigged regularly until its 75lbs weight eventually defeated me. Has a power reduction switch for 12W. 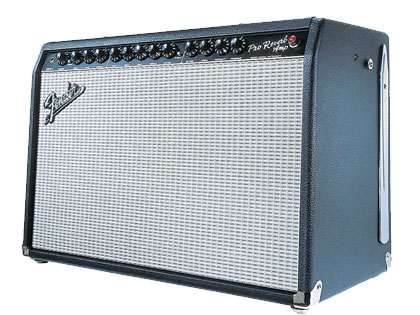 This amp was only offered for a few years back in the late 90’s and early 2000’s. You can’t buy it anymore. Not sure what that means but I liked it when I was using it. I bought it in around 2002. This is the amp I used for about 4 years in the early […]
www.bluesguitarinsider.com I got my near mint condition 1967 Pro Reverb for $1700 a few months ago. Its an amazing amp and will blow away any reissue Fender.
You must log in or register to reply here.