Do you carry a pocket knife?

I generally carry a Bestech. The Swordfish is my favorite but I have at least half a dozen Bestech models. 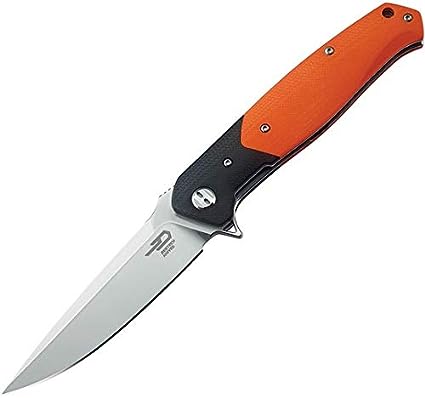 Nothing day-to-day, but a Gerber Truss multitool when I'm working. At home I have one of my favourite possessions, an official Jackie Chan branded Swiss Army knife.

Yep. Recent American made Gerber. Kind of fat and big for my pocket but not too bad. No go with jeans.

Here is a family portrait shot. There are more, but these are the main ones. I carry an old Barlow that I inherited from my father

My other camping fishing knife. I carried various folding knives, mostly Benchmade, Al Mar, Spyderco and Chris Reeve for years when i could justify carrying a locking folder, these days i only carry a locking folder at home, at the minute its a humble Spyderco Delica.
The rest of the time i carry a non locking folder and 9 times out of 10 it will be a Spyderco because of the one hand opening and pocket clip, they are all UK legal. I posted this pic to an EDC forum. One guy said he was going to quit. Fortunately, 99% of the members had a sense of humor. Note my tactical flash-candle. I have about 8 or 9. all Benchmade folders. Different sizes, right now carrying a Mel Pardue Griptilian, one of my favorites. Mine has a black blade, not the stainless shown in the pic. When I used to walk my dog (when she was still alive) used to carry my LFK which has a 5.2" blade, very large for a folder. Large pocket knife. Sort of a young sword when unfolded. Discontinued.

I used to carry a Gerber Covert (like the Applegate-Fairbairn the "fictional" Henry Bowman carried) but the clip screw holes kept stripping out and the screws would pull out, so gave up on them after Gerber replaced the second one. The Benchmades have been rock-solid, no issues over many years of usage.

I carry a Leatherman Wingman at work. Off the clock, not so much.
G

It fits in the pocket watch pocket in my jeans and does an amazing amount of stuff.

I used to carry a Tinker and generally carry a Sportsman now. That little screwdriver came in handy. Without any provocation my phone decided to rotate the pic 90 degrees right. Top, solid copper 1 AAA flashlight photo bombed the knives because it always partners with them. Left, 1960s Case was my grandfathers(avatar). Used mostly to scrape the gunk out of his corn cob pipes. I carry it for small stuff and to remind me to aspire to be as good a man as he was. Right, Fairly new bone handled Filson. Bottom is a Lone Wolf Knives (prior to Benchmade buying them) "double duty" with cocobolo handles. It can be opened by using the thumb hole or automatically by slightly sliding the one side of the handle about 1/16". I use this one for lighter duty stuff like cutting ring bologna, cheese, rope etc.
Last edited: May 20, 2022

Carried pocket knives since I was 7. Was a Scout leader for 9 years and always had a large folder on my hip. Quit a couple years ago. Realized I had a Spyderco Native in my desk drawer, a Victorinox classic and a SOG Trident in my truck, and found that a folding boxknife works great for opening cartons and other mailing packages without having a blade to worry about getting gummed up or dull - just pop in a new one. And with all the paranoia surrounding metal objects since 9/11, I'd prefer not to set off the Oh Sh*t button at the airport or the county building.

I've always carried a pocket knife - ever since I was a little boy, 5 or 6 years old

Currently it's a Benchmade Presidio - the slightly smaller version, that's now discontinued - easy to deploy with either hand - instantly

For me, it's the perfect pocket knife, with a great blade shape made out of a real good steel, alloy S30V - fairly easy to sharpen, and it holds it's edge really well too - a dull knife is pretty useless as a tool unless you are using it for a pry bar!

Happy Enchilada said:
. . . a folding boxknife works great for opening cartons and other mailing packages without having a blade to worry about getting gummed up or dull - just pop in a new one.
Click to expand...

The Kershaw goes in my pocket before I leave the house for anything, but during my remodel, this folding boxcutter went in my other pocket. Its last official remodel duty was cutting away shingles for a bathroom vent. StoneH said:
I posted this pic to an EDC forum. One guy said he was going to quit. Fortunately, 99% of the members had a sense of humor. Note my tactical flash-candle. A quick inventory of my XC70 delivered these that travel with me but not on my person.
For a living I do carpentry electrical plumbing painting gardening and herding the cats as needed.
So I have at least 200 lbs of tools in my vehicle and would never carry a knife with pliers built into the handle.
I can see the attraction though if you don’t have several saws, pliers, channel locks, open end and socket wrenches etc with you.

I use the Wakizashi fairly often chopping bamboo, that’s from the old US Camillus factory when it shut down ten years back. The two blade folder is Byrd which is Spyderco’s Squier line of cheaper imports, that’s mostly in case I need to cut seat belts so it stays in the front seat. The fixed blade Gerber is a basic hunting knife that’s disposable priced and makes sense if you live out in the sticks but I seldom use it.
The utility knife AKA box cutter gets tons of use including for surgery when splinters don’t want yo come out and the Opinel cuts the cheese. Been gone awhile but...

PSA - Airports and guitars and gear

just a howdy and thank you