Do you carry a pocket knife?

StoneH said:
Since we have diverged from pocket knives, I'll add one more working knife. I've had this fillet knife for well over 20 years. It can slice skin like a razor blade (meaning you don't feel the cut, you just see the blood). I wear a glove on my left hand that is made up of tiny, fabric chainmail links.

I can’t imagine how many fish that has cleaned. I like getting your money’s worth out of a knife.
L

I have a Swiss Army knife that I use around the house, but I seldom carry it around. I always know where it is.

bobio said:
LOL, not a bad problem to have I have the same problem.
My Spyderco collection primarily consists of Para 3 and Delica knives.
Here are a few from my collection.


I built these hidden shelves that sit behind books in the hutch top of my desk.
I have a set of these shelves on both sides full of knives...

You are afflicted! I like the storage, beats my current situation.

I only have one delica. It started as a DLT exclusive in CPM20V that I wrapped in CF scales from a guy in Australia that I found on Etsy. He made a custom set for me that uses a wire clip from the Urban. The bolt that holds the wire clip is a pivot bolt (FYI) and it just fits in the lanyard hole of the delica. I don’t know why spyderco doesn’t offer a wire clip on that knife because it is a natural! StoneH said:
(meaning you don't feel the cut, you just see the blood).
Click to expand...

erix said:
I only have one delica. It started as a DLT exclusive in CPM20V that I wrapped in CF scales from a guy in Australia that I found on Etsy. He made a custom set for me that uses a wire clip from the Urban. The bolt that holds the wire clip is a pivot bolt (FYI) and it just fits in the lanyard hole of the delica. I don’t know why spyderco doesn’t offer a wire clip on that knife because it is a natural!
View attachment 985836 View attachment 985835
Click to expand...

Love the carbon fiber, have cf on a Delica as well

I got my scales and the titanium backstrap, which I polished, from Flytanium.

I have more than one Delica that started out as the same DLT Trading model you are likely talking about.

I’ve got three Kershaw knives, these two and one more just like the top one, but without the serrations. Not for daily carry though. These two stayin the house (well, I mostly do too these days) and the other is in my car, along with a leatherman multi-tool). These two are my everyday carry knives. Which one I carry depends on what I'm doing and where I'm going.

Spyderco Matriarch on top, Spyderco Navigator on the bottom. The OP asks, "Do you carry a pocket knife?", and 11 pages later I have learned:

"Don't eff with a guy who plays a Telecaster".

I’ve been intrigued with the variety of knives owned by the TDPRI. I’ll get some shots of my small collection (I’m not a collector) of knives that I don‘t carry but own I wear one at work, which can be gruelingly physical. This is my latest one, have lost or given away a few. I have now sworn off giving them to young men I work with, because even after I gave them one, they would never have one, and many couldn’t even keep up with this fifty year old fatty haha.

I carry this Cold Steel 4 Max out in the field for residential unnoticeable pruning on lot surveys. Its got some heft to it and will pull your pants down if you don't have your belt on and cinched. Got that knife cheap direct from cold steel for under 20 bucks on sale Slickdeals find. 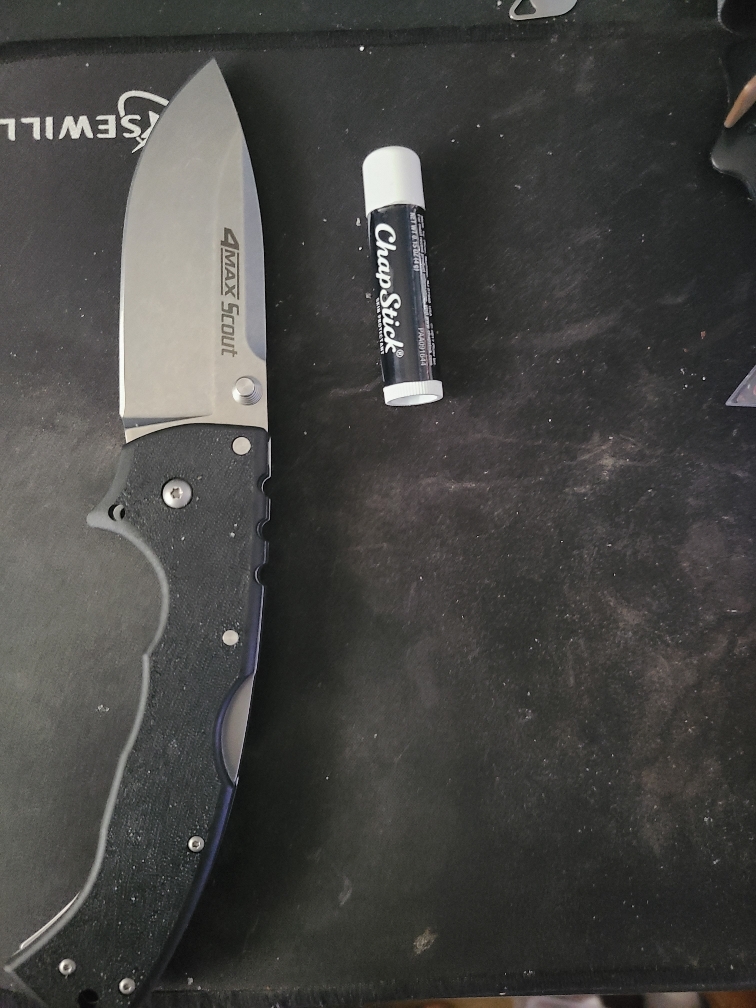 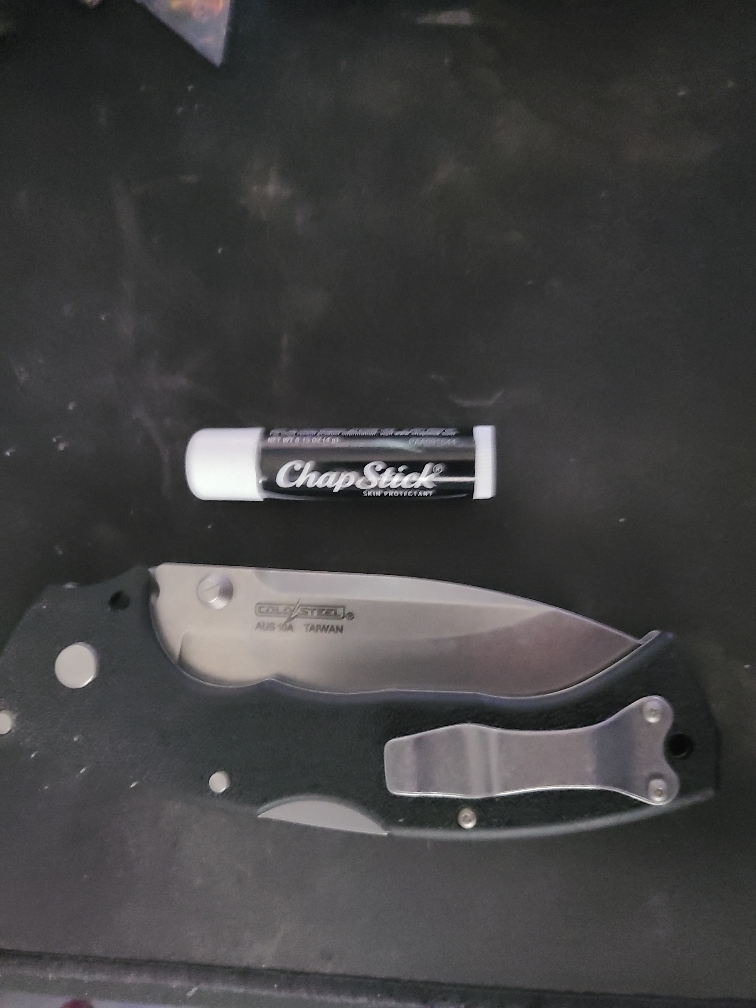 Nice to see other collectors, I've been known to overdo collections in my life including guitars, knives, watches and Zippo lighters, never mind the records and CDs

I look at my collections some times and think, I really should sell that, what does a former Scoutmaster need with a Chris Reeve Mnandi or a Case/Bose damascus Muskrat, but they certainly are things of beautiful craftsmanship and of course very handy for slicing up some pepperoni for a campfire! Not that I would use a Case/Bose at a Scout campfire but you know what I mean...

srvy said:
I've seen a lot of mentions of great brush cutters like machetes and such. I've been a land surveyor for over 40 years and have seen a few nasty accidents with a machete. It's usually from sweaty hands and no leather tung to wrap at wrist.

The best tool I ever is a true temper ditch bank blade. I have cut miles and miles of road centerline over the years with one. The hook is out front of you keeping arms out of greenbrier and multi-flora rose not to mention poison ivy. Cutting four to six inch trees is a breeze and we have even tag-teamed on 12-inch oak and hackberry. It beats the heck out of lugging gas oil and a noisy chainsaw deep into the timber. 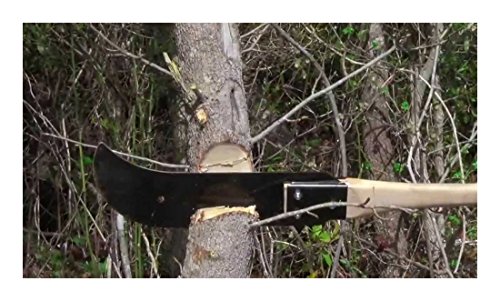 That looks like a weapon from the original series of Star Trek!

I got my first knife when I was around 10 and have carried one much of the time ever since. I still have that knife, but no pictures.

I have carried this SAK on and off since around 1990. Even if not on my person, it is almost always in my bag (usually with a 1911 and a couple of spare mags). I have used every tool on it more times than I can count, with the possible exception of the fish scaler, though it has gotten occasional use as well (mostly the U shaped end to hold or pull things). I have cut down small trees with the saw, opened countless wine bottles (including recently), used the magnifying glass to read tiny print ~1,000,000 times, filed countless plastic things with the nail file and saw, used the reamer on everything from toys to electronics to leather belts, used the four screwdrivers for seriously hard applications without an issue, used the blades to cut things a few times, and the can and bottle openers have regularly been the only openers in the house (they are currently the only "openers" I have). That said, the scissors are easily the most used tool, and I couldn't even begin to describe how many times and on what they have been used.

I have had a couple of Leatherman and Gerber multitools, but honestly they felt flimsier and worse designed than my old SAK, and they are long gone. That said, for the last handful of years I have carried an OTF automatic knife, which is legal in Florida if you have a concealed weapons permit (FWIW, the odds of this ever being used as a weapon by me are truly zero). This is handiest knife I have ever owned. One handed opening and closing makes use so much easier. I've oiled it once in approx 3-4 years of ownership, but it's coming up on a another service interval. I was all set to say "no," and then I realized that I've been carrying a CKRT P.E.C.K. in my right front pants pocket for years.

Otherwise, I've got tons of knives that I just sort of accumulate. Most recent is an Ontario Knife Works Model 1 in D2 steel. There's an ESEE 6, a bunch of camping-oriented knives and various and sundry that just looked/felt cool or that seemed to have a lot of utility (several Swiss Army styles, Leatherman styles, etc.).

Flat6Driver said:
It's a weapon if thrust at someone. If folded up in a poxket under the car keys or on the belt, it's not a problem. As a self defense item, a folder knife isn't particularly useful. "Hold still while I open the blade...."
Click to expand...

Flat6Driver said:
It's a weapon if thrust at someone. If folded up in a poxket under the car keys or on the belt, it's not a problem. As a self defense item, a folder knife isn't particularly useful. "Hold still while I open the blade...."
Click to expand...

Some folders can be opened very quickly. But yes: a small knife isn't all that great as a defensive weapon. It has no range. If somebody were to attack me now, I'd rather grab the chair that I'm sitting on.

perttime said:
Some folders can be opened very quickly. But yes: a small knife isn't all that great as a defensive weapon. It has no range. If somebody were to attack me now, I'd rather grab the chair that I'm sitting on.
Click to expand...

I didn't say it couldn't be done, depends on how you carry it I guess. My kershaw is clipped to a pocket. That pocket depends on the pants I'm wearing. The SAK is at the bottom of a different pocket (when I have both). The Kershaw would be a last resort. The SAK would be useful to ensure I was dead. (As a kid, I did walk through a sketchy place and I opened up the phillips screwdriver and held the thing in my fist in a jacket pocket till I was where I wanted to be). I really like classic Opinels. Tough as old boots and a cut above (see what I did there?) cheap Chinese stuff. I could buy and lose a dozen, for the price of a Spyderco.

Absolutely useless, without the locking ring, though. UK knife laws are cartoonish. They don't stop South London gang bangers (usually children) from slicing and stabbing one another and they're inconvenient, for old blokes, with apples to cut up.
You must log in or register to reply here.

Been gone awhile but...

just a howdy and thank you

Does Anyone Use a Tablet for Lyrics on Stage? Please Advise!
4 5 6