Did You Grow Up Without a TV Remote?

The TV never got turned on until after evening dinner during the 60's at our house.....

even up until '72 when I finished highschool I never saw any morning TV....

I only ever saw sesame street if I called into a mate's place on the way to school for a few minutes to get him out the door. He had pre school siblings who watched it.

jaxjaxon said:
I guess my music gear is more advanced then my other entertainment stuff.
Click to expand...

I remember when Walt Disney himself started announcing that soon his show would be broadcast in living color. Probably 1963, we counted down the days and hours. Finally the night of this most wonderful event arrived. They even had a special song to announce that the world is a parasol of color, wonderful, beautiful color. And suddenly-----there was no color, just black and white. Apparently you had to have a color TV to enjoy this new event. Instead of a world of color it was a world of disappointment. I never saw color TV in my home until I came back from Asia, only because no one made black and white TV anymore and the old man was forced to buy into something that they would never be able to perfect, the color TV.

“The phones were connected to the wall!..the WALL!”


Times sure are a changing and faster than they used to, dang technology

Flip G said:
Our household fought over this monstrosity in the early 80s. I used to poke around in its innards with a Phillips head screwdriver and try dialing in the scrambled adult channels after my folks went to bed. 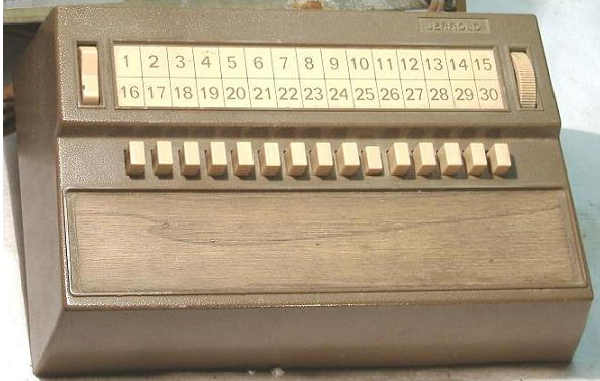 I did the exact same thing. I remember doing that to see Sam Kinnison on Rodney Dangerfield's young comic special on HBO.

My grandfather's TV had a four button "clicker" before he had a Death Star-sized satellite dish.

Fretting out said:
Times sure are a changing and faster than they used to, dang technology.
Click to expand...

The trick is knowing what to keep and what to let go.

Early 60's I guess, black and white, one watchable channel. And a black rotary dial phone on the wall, that required you to check and make sure the other party wasnt on the line if you wished to make a call.

Later, a color tv and an added a rooftop antenna. 3 channels, two barely watchable/fuzzy. The tv was likely used, as I distinctly recall there literally being a pair of vice grips on the channel dial.

The closest thing to a remote was the later addition of the "rotator" and its set top controller dial. (I remember rotating the dial and going out to watch the antenna move...)
I would say all that did was make two of the three channels a bit less fuzzy, but this was about the time a (VHF?) channel or two appeared as well.

I remember about all we ever watched then was the Sunday evening sequence of "Wide World of Sports" (the agony of defeat) Disney, and that Omaha insurance sponsored nature show. Once we could stay up that late.

Movies, Twilight Zone, and even morning cartoons came much later.

Remote? Decades later.
So, no. Did not grow up with remotes by any stretch. Nor air conditioning. I didnt see the inside of a McD's until I was nearly 20... I think I got a tv with a remote even later than that.
19" , Circuit City scratch and dent shelf.
Big time 'Playa' I was then...

HoodieMcFoodie said:
As the youngest child I was the TV remote.
Click to expand...

Bingo, you and me both..

bgmacaw said:
"I'm afraid I can't do that Dave"

Just stare at the test screen after sign off.

No remote. No cable.
Sometimes a 20inch console that got carted to a TV repair place twice and after the second fix failed it just became a TV stand for the 13 inch B&W.

Late 70s there was not much on television Friday evenings for kids other than The Dukes of Hazard or Wall Street Week with Louis Rukeyser. My younger brother who must have been eight or nine at the time made an arrangement with our father. Every other week it was one or the other show. On the off weeks our father headed over to grandma's to watch WSW. Of course it would have paid early dividends to watch WSW more often

Timbresmith1 said:
I was jealous of the neighbors remote. “Ka-chunk, ka-chunk-ka-chunk-ka-chunka-chunk” (they were mechanical). For a sub-total of 4! Channels 2,4,7, and 9.
Unless you went over to the UHF side. From there you could add 20, 50 and 57. A virtual wild west of teevee programming. Cartoons, monster movies, Sesame street or local programming.
Click to expand...

And crazy commercials for local businesses.

Nah....
I had two little brother's.
They would be at my beck and call for Bubble Gum.

We were rarely allowed to watch TV…maybe two hours a week at most…
Click to expand...

Yep. And 3 Stooges was strictly verboten !

I know the thread title said "TV Remote", but it was really about another technology improvement which allows you to change your thermostat from your phone. . .

Which my wife just did before she walked right past the thermostat on the way to our bedroom! In the early 1960s my aunt had a little 12" B&W Zenith Space Command tv with a remote. The remote was a large, heavy thing with only a few buttons on it. The buttons made a loud "clank" when you pressed them, and the TV went "clunk". It was a very tactile and auditory experience. 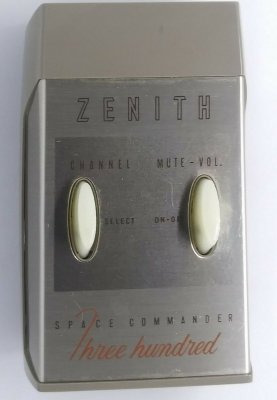 Remote control? We lived out in the mountains and had a choice of one channel . Take it or leave it. If a program was not on CBS we never saw it.
You must log in or register to reply here.
Share:
Reddit Pinterest Tumblr WhatsApp Email Share Link