About the Pro Reverb in a Deluxe Reverb chassis...well it all fits, and works fine, only problem -- I miscalculated and the rectifier tube is touching the power transformer. I'll do something to get a tiny bit of clearance. Otherwise, it's a peach.

I'm a firm believer in head only amps and speaker only cabs. Whereas at 66 I still have some pretty good muscle left on me but the arthritis in my hands HURTS ALL NIGHT and I cannot sleep if I carry too much. Even with the Tramadol I get from the Doc. And of course there are casters on the bottom of those speaker cabs..... nickmm said:
Isn't that a mesa boogie with less power?
Click to expand... 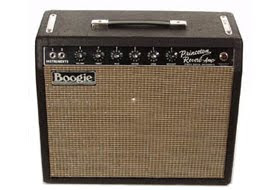 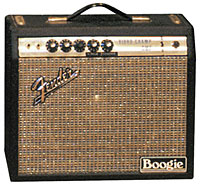 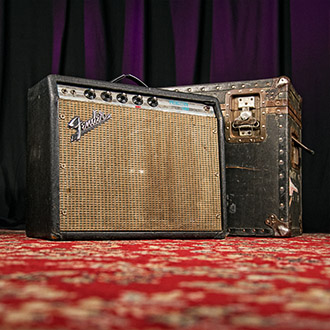 Wally said:
Those amps had been massaged by Cesar Diaz to have a much tighter low end.
Click to expand...

I wanted the clean low end and punch of a DR but in a Princeton-sized combo, so I followed Diaz's example and did a the following mods to a PR:

-Installed a Heyboer TO20 output transformer
-Built a beefier baffle to prevent baffle buzz from the flexible stock baffle
-Swapped in a Weber 10F150 on Ted Weber's advice
-Swapped in a Copper Cap SS rectifier to improve punch and reduce compression sag
-Installed JJ 6V6s and biased the amp; JJ 6V6s are closer to 6L6s than 6V6s

The amp is louder than stock, and there's very little breakup in the low end when the volume is between 8 and 10. It's clean and punchy; no typical PR farting out at high volumes. I've had this amp now for 10 years and it's been a beast of a devil box.
You must log in or register to reply here.