As a gift for a friend with a serious Keith Richards fetish, I'm taking an Silvertone organ amp chassis and building a tweed-y head. This thread will document the process and results.

The donor chassis is from a 1964 Silvertone model 4704 reed organ that I bought on FBM for $20 as a toy for my son. Tube complement is a 5Y3 rectifier, 6AQ5 power tube (a 6V6 in a miniature 7-pin bottle), and two 12AX7s (one for preamp/driver, one for a tremolo oscillator.) The original circuit took a small piezo mic that sat inside the reed box, amplified it, ran it through a choice of voicing filter ("flute" and "reed", IIRC) and applied optional tremolo, then sent it on to the power amp.

As-is, it's totally unsuitable for guitar use. However, it has all the right bones to be a killer guitar amp, which is (hopefully) what I'm making. The basic circuit is the Fender 6G10 Harvard, which is effectively a 5F3 Champ with a 5E3 tone stack. The other 12AX7 drives a tremolo circuit TBD (I like the Vibro-Champ trem, but I also like things that don't need two specialized reverse-audio pots.)

Regarding the power supply ... this little amp just doesn't have the volts that Fender provided (by design, because the 6AQ5 isn't as robust as a real 6V6). So I'm supplanting the 5Y3 with diodes - it will still be lit up, but it won't be doing anything. No need for a sag resistor because the SE output section pulls close to the same current under load that it does at idle. (That's also why I felt okay about beefing up the filtering.) Even so, the voltages are low by about 70 volts, so I've had to make some adjustments to bias and such, and it will only output about 2.5W before it starts to distort enough to hear. But this will end up being a studio amp, not live, so 2.5W is plenty.

To do the build, I'll be reusing what I can from the Silvertone. Components will come from my stash of vintage pulls, which include bits from Hammond and Wurlitzer. The preamp tubes are really tired, so I'll probably use pulls from the Wurlitzer; the power tube is in good shape, but I'll also provide an NOS spare. With any luck, the only new components will be the filter caps!
Last edited: Aug 30, 2022

Topside photo, showcasing the OG Silvertone tubes. If you look closely you can see that the 12AX7s are Mullard ... it's a shame they're so tired, because I could sell them for a couple bucks otherwise. 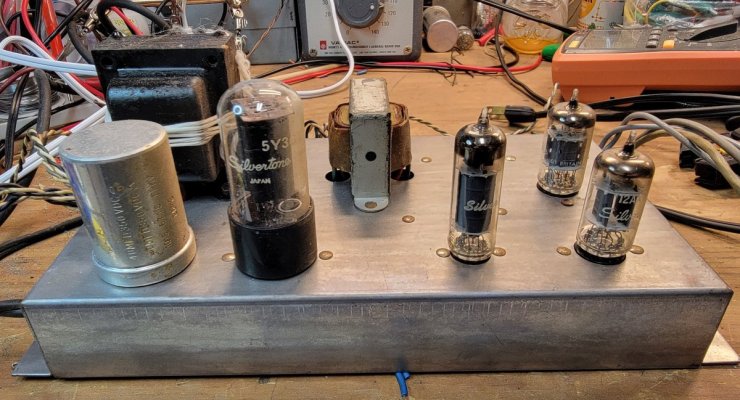 Below decks. Other than clipping the OT leads for measurement purposes, this is as-pulled. 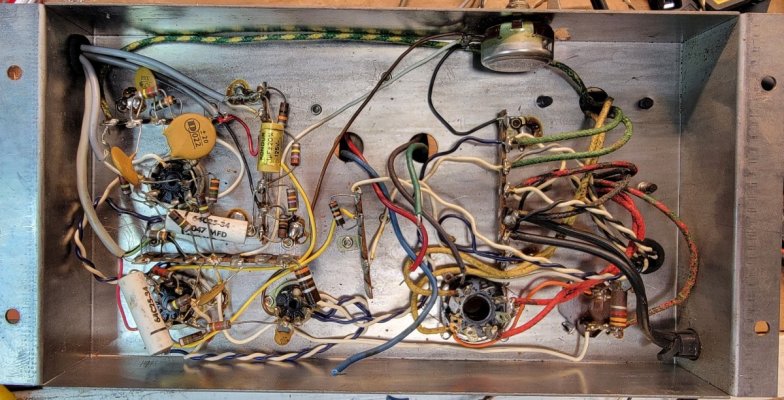 Cleanup stage 1 complete - all components clipped out and transformers pulled. Next up is cleaning up the solder and wire bits left behind. 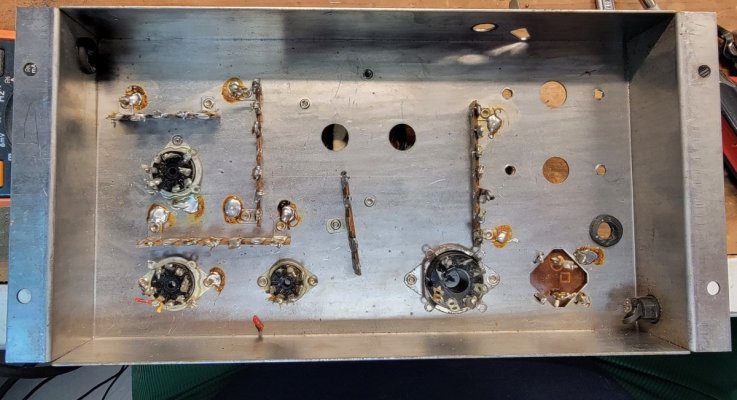 Draft schematic. No tremolo yet.

Ha! Well, the chord box never worked right, and I got him a Magnus Cathedral reed organ before I chopped it up. (Which incidentally has an absurdly beefy 2xEL84 amp for its 6" speaker, go figure.)

He's also got a Hammond M3, a Baldwin upright, a Korg workstation, and a Novation controller, so I don't think he's TOO deprived.

Deafen said:
Ha! Well, the chord box never worked right, and I got him a Magnus Cathedral reed organ before I chopped it up. (Which incidentally has an absurdly beefy 2xEL84 amp for its 6" speaker, go figure.)

He's also got a Hammond M3, a Baldwin upright, a Korg workstation, and a Novation controller, so I don't think he's TOO deprived.

I think I would s'pect his next "toy" that you could borrow would be a nice Leslie or something of that ilk. An M3 - and Silvertones - always need a Leslie.

Boreas said:
I think I would s'pect his next "toy" that you could borrow would be a nice Leslie or something of that ilk. An M3 - and Silvertones - always need a Leslie.
Click to expand...

It's not a Leslie, but I scavenged a Spectratone setup out of a Wurlitzer organ that has a similar rotary effect. I've got all the bits to put it into a little cabinet with a footswitch for high/low speed. It's on my list after this plus one more project!

Prototype is built and tested with a signal generator. It's got some snivets at full volume - probably because of the rat's nest of fly wires and clip leads, but I'm going to put in grid and screen stoppers anyway, because they shouldn't really change the character of the circuit.

After modeling several different trem circuits, I settled on the 5E9-A Tremolux, as suggested by RobRob. Mostly because it doesn't require any exotic components (3M RA pot, vactrol, opto-roach, etc.) I did tweak one resistor to allow a slower oscillation (4Hz instead of 5), but other than that it's lifted straight from the schematic. It inserts at the cathode of the driver stage. 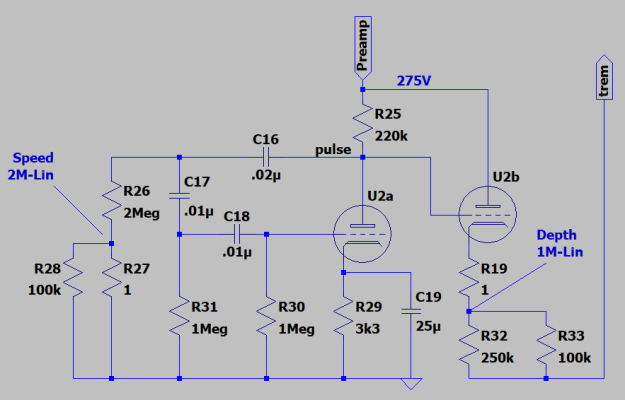 Here is the simulation at top speed and intensity. Choppy!

Next up is to add the trem to the prototype and hook up a guitar and speaker!
Last edited: Sep 6, 2022

More pics of the chassis refurb ... 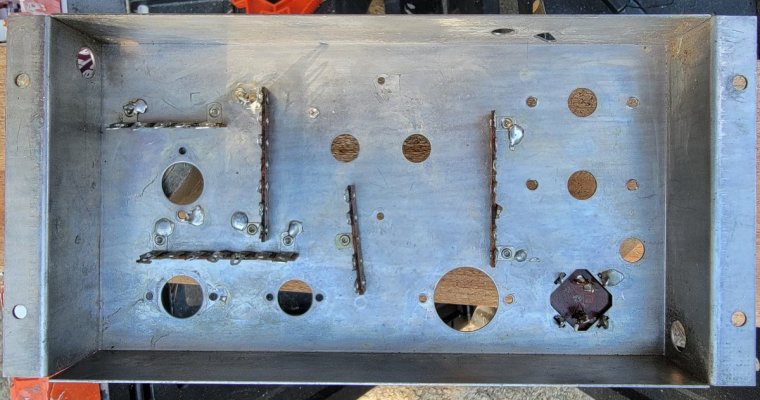 Exterior after thorough cleaning and degreasing (thanks, toluene!) 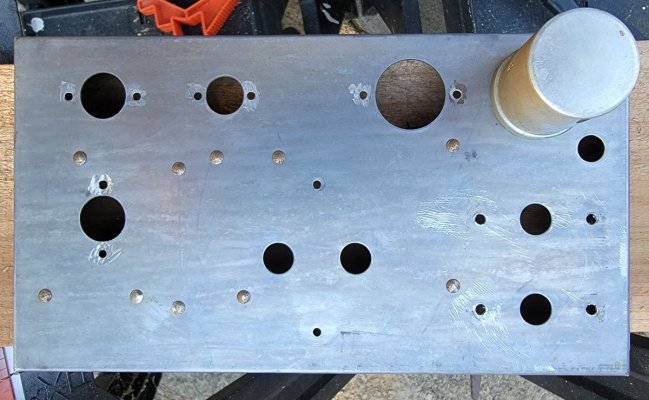 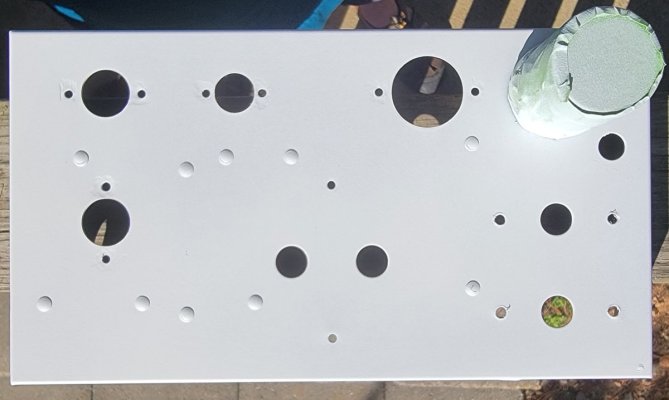 Finish coat in hammered copper! Not my finest work, but it'll do. 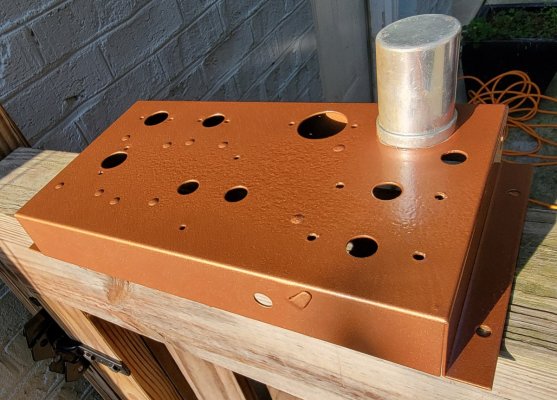 Oh, and as I was pulling the OT, one of the leads pulled clean out, so I had to do some surgery. Soldering to 43-gauge wire isn't really my favorite thing to do, but what the hell. Afterwards, I buried all the lead connections in epoxy so that no more mishaps can take place. Not sure how I'm going to make it look nice again when all is said and done. Maybe just paint it all with high-temp black. Oooh, or maybe plasti-dip! 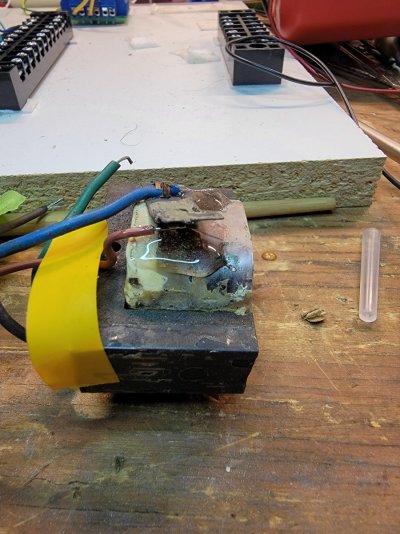 The prototype is built, including the tremolo! Here's the dangerous high-voltage prototype ... careful what you touch! 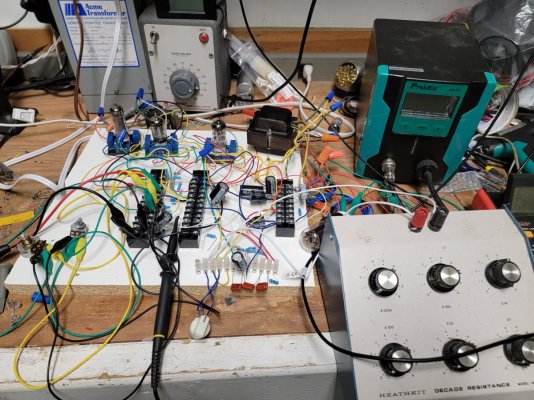 And here's the output, using a signal generator and dummy load, with the trem engaged. 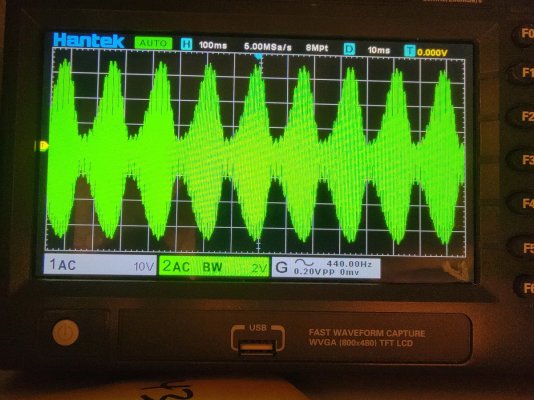 So the circuit is good, the chassis is prepped, what's left to do? Build it!

Here's the chassis with the trafos and sockets installed. I cleaned up the sockets with IPA and ran them through the ultrasonic cleaner before installing them. 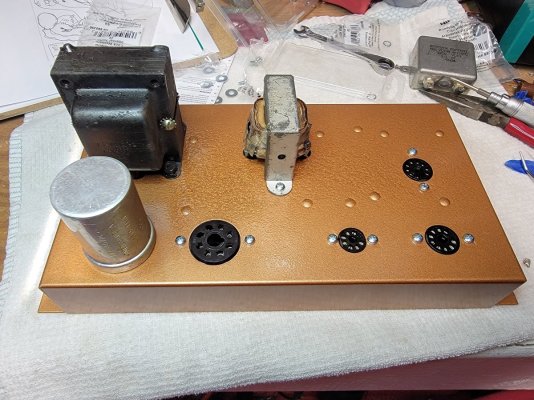 And here's where my sub-par assembly skills start to come to the fore. P2P is messy looking to begin with, and in this case I'm retrofitting a circuit that this chassis was not designed for. I'm also using recycled vintage parts everywhere I can, which leads to suboptimal dimensions and additional messiness. But I'm owning it.

Here's the power supply and power tube all wired up. I'm using a local star ground topology, with everything returning to the chassis at the first filter cap.

(You may notice that there's no power ingress. I'll be cutting in an IEC outlet with integrated switch. Yes, I should have cut the chassis first. Oops.) 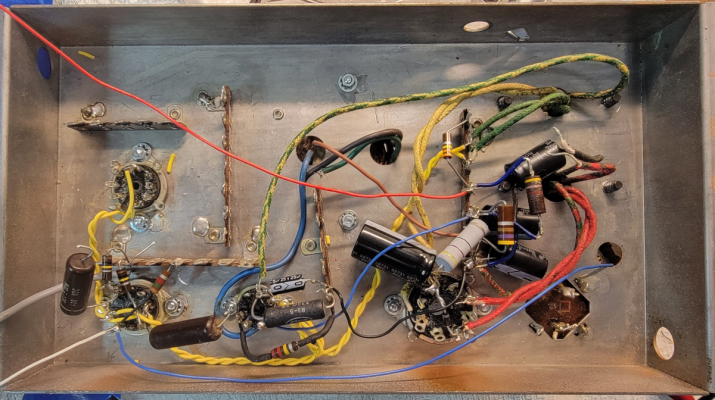