Not long ago, I set out to get an amp and ended up with a Rectoverb 50 series II combo. And it's a very cool amp, I dig it! But it's huge for a 1x12, plus the power level may be a bit much for my needs (though it's easy to control on this, which I do like), so I'm using the thing for about 1% of what it can do.

I've been thinking about getting a smaller Mesa of some sort to replace it, but I don't have much experience with a lot of the older models that exist. So I'm wondering if anyone may be able to shed a bit of light on what these were kind of designed for, what they compare to in other amps, whether or not they were known for issues, etc.

I'm a fan of their typical sound, the aggressive high gain but also nice clean. And I definitely like my current amp for that, no doubt. If it was only a bit smaller, that would be ideal. The amps listed above seem to come in a smaller package, so if any of those compares highly, I'm certainly interested in finding out which.
Or, by comparison, if any of these are absolutely the opposite, it'd be good to know that to, so as to avoid them.

Any insight is much appreciated. My Express 5:25 serves me well. It’s about as small as you can get, a 1x10, from Mesa Boogie. I don’t need bigger and would never want to go smaller. I love the 5 watt setting for in the house. My playing is clean to crunch, mostly finger style. I don’t use either high gain channel unless I’m psst at my wife. It’s pictured with one of my Stratocasters for scale.

.22 Caliber is a lower powered (22 watts) model with really just one channel and has a foot switchable overdrive section that includes a 'lead gain' control.
It also has a 5 band graphic EQ that is switchable in and out.
The power tubes are EL84s and typically saturate (compress) earlier than 6v6 or 6l6 tubes.
Even though it is a "class A" amp w/el84s, it's not Voxy at all.
Mine is a single 12" combo currently w/a Celestion V30 in it. *I think a Black Shadow was the orig spkr.
It sounds great, similar to a MK1 and it is built like a tank.

The Studio Cal 22 Plus is a great little amp, ime. I like the Fender Super Champ more, though.

Great thread, I started looking at smaller Boogie amps myself lately, thinking maybe the 5:25? But then again I looked at the Nomads, or F30, which all are pretty affordable used and maybe not that heavy as the Lonestar? Will be reading with interest. Could you guys, who own them also give a weight ballpark?

Mesa has a manual with the weight for every amp they build.

How would you say the gain channels compare to something like the Rectifiers? I realize that they probably aren't specifically built to be that sort of "90s high gain chug" that you tend to hear from a much larger, more potent beast of an amp. But from what tend to recall, most Mesas have a decent gain sound to them. Just wondering if it's something that was always there or if you had to get specific to certain ones to find it.

@klasaine Does it seem kind of like it doesn't have a clean channel with the way that it's built like that? Or can you dial in a clean, then the footswitch allows for decent gain?
I did notice that some of the more basic amps they made (Subway Rocket, for example) seemed to be much more scaled back for features, yet still had channel switching.

@JL_LI Is the small size limiting the kind of bass response you'd find? Or does it kind of "sound bigger than it is"?

FWIW, I found this on the Mesa site. It doesn't have some of the models I was asking about, plus they don't have "personal experience" feedback that actual folks can give, but it does have some good specs:
https://www.mesaboogie.com/support/out-of-production/index.html

Wally said:
Mesa has a manual with the weight for every amp they build.
Click to expand...

Thanks, will look it up!

I had a Rocket 44 for 20+ years. Never had an issue with it. I just finally traded in for a Bassman but I always loved it. Small, loud and solid

@JL_LI Is the small size limiting the kind of bass response you'd find? Or does it kind of "sound bigger than it is"?

FWIW, I found this on the Mesa site. It doesn't have some of the models I was asking about, plus they don't have "personal experience" feedback that actual folks can give, but it does have some good specs:
https://www.mesaboogie.com/support/out-of-production/index.html
Click to expand...

My Express 5:25 is an amp for 6 string guitars. It’s not a bass amp. That said, the I haven’t turned the Bass in any channel past 11 o’clock. I play finger style and enjoy the sound of the wound strings. The amp can get crazy loud but I don’t use it that way. I’d probably want an extension cab to play in a crowded bar with patrons blocking low frequencies but I use mine at home where it’s more than enough. The amp has been reliable. In ten years it’s needed power tubes. I replaced the preamp tubes with Mesa Boogie SPAX7 tubes to lower the noise floor. That’s maintenance, not repair, in my book.

Another vote for the Rocket 44 here if you want something giggable. Had 3 Studio 22's, really nice but hiss a lot, not quite loud enough, Subway Blues nice but breaks up early, F30 has 2 sounds, glassy clean and absolute filth, nothing in between, ok if you're in a 90's hair metal band. Rocket 44 has a great clean sound, typical of early Boogies, great platform for pedals, loud and light, I never did use the 2nd channel much on any of mine. Always wanted to try the rocket 440 (4x10 with reverb and trem) but never seen one in the wild.

You can’t miss what you never had. Mine has a contour control that I use minimally on one channel. The picture I posted shows a BOSS EQ-200 and a Fender Mirror Image Delay on top. I have equalization settings in memory specific to each of my guitars. Equalization on the input side is really tone shaping. What I do works for me. I use the delay in place of the tank reverb because delay preserves attack and clarity. It also gives notes a bit of movement because of the interference between the sound and the repeat placed over it. The sweet spot seems to be the dotted eighth selection. I turn off the delay when I try to emulate an acoustic or for traditional jazz. I turn off the equalizer with the bridge and middle selected on a Strat.

I’m not a rocker. I don’t use distortion, just a bit of crunch I get from the amp. I’m not your typical Mesa Boogie customer. This amp does everything I need from an amplifier, with the possible exception that it’s not a desktop amp for the front porch.

I've got a '90s Subway Rocket. It's a great sounding amp; cleans are lush and three dimensional, and it does the Mesa compressed distortion thing well. Mine is currently set up as a pedal platform. Only drawback I can think of is it sounds kinda boxy when you keep it at bedroom volumes. Turn it up and it roars with the best of them though. Way loud enough to do small to medium sized places. 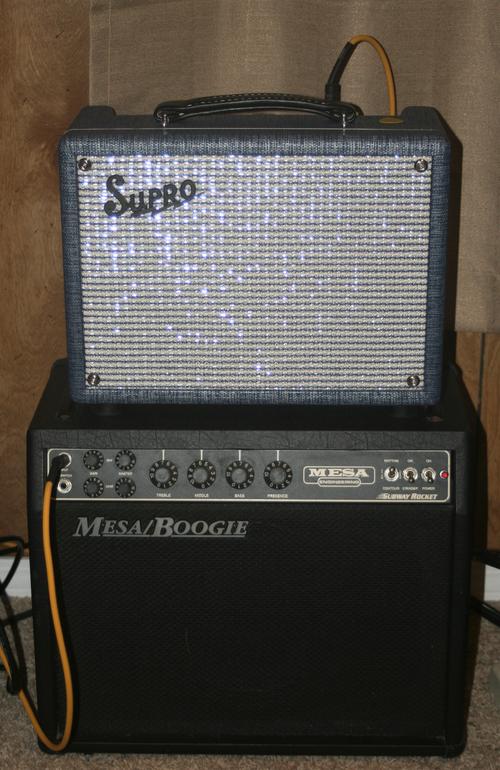 I’ve had an F30, F50, and a 5:25 1x10 like the one farther up in the thread. None of these amps stayed around for long. That said, the 5:25 was an excellent amp under mic. I replaced it with a 5E3 build and have never regretted it. The F series amps hiss loudly at idle, but otherwise are also fine amps. I tend to prefer 6V6/6L6 Mesas though.

This is all very good intel, thank you all for the help.

@ScottJPatrick You may have tilted me in exactly the right direction with the Rocket 44, BUT I'm also not opposed to the F30 from what you're saying. I'm not into 90s hair, but I was after the Recto for the gain and the clean channel ends up really clean for me. And I have pedals for the in-betweens, so if I found the right deal on one, it may be a contender. But the Rocket 44 sounds even more tantalizing.

The hiss is a thing I'd certainly like to avoid. I actually briefly had a Nomad 100 YEARS ago and it was a loud hisser. The Recto, not at all. I do realize it may be fixable, but there seems to be a large amount of reviews of Mesas that hiss, so again, if it can be avoided, I'll be doing that.

@JL_LI Yeah, I certainly wouldn't need it as a bass amp, but do find myself in various tunings and sometimes with a baritone. I've played some amps with practically no bass response at all and those aren't for me. But if it can get a little beefy with the gain going or in a clean twang situation, that's essentially where I'd want it.

Still, the Rocket 44 sounds like a pretty interesting candidate.

Side note to self: it's funny that we won't amps that hiss, but love pickups that hum.

Not a combo but easy to shift! The HK cab has a 10” Celestion driver and puts out good sound for its size. I also use a Mesa 112 when necessary. Had the studio caliber.22 .did clean and pedals well. Speaker
change does wonders..to get your tone.
The tone controls always needed too much tweaking for me
to get in the sweet spot .
You must log in or register to reply here.