Along with some other parts for a repair job, I received a CE Distribution filter can this week. Was supposed to be 3x20uf @ 525v. It appeared to be mislabeled. If you look carefully at the picture, there's two labels on it.

I called them because I wanted to be sure it was mislabeled and not the wrong cap. Customer service assured me that it was the correct cap. "Don't worry, we tested the capacitance and the voltage." That made no sense to me. How can you test the voltage of a capacitor? I spoke to a supervisor who explicitly told me they would, reship a new part from a different batch.

A couple day later I received another cap which was apparently from the same batch, thrown in a box with no wrapper, just a wad of paper. The label is stuck on top of another half of a label which was torn off. So there's a bit of a ripple in the label.

Does anyone care about the quality of anything anymore? I have a customer who pays extra for filter cans because he wants to keep his amps as original as possible. Far as I'm concerned, the only difference between the multi-section cans and separate caps is the appearance. If you want to charge $40 for a capacitor, get it right! It's about presentation. If you're going to send the same crap, at least clean the old label off! 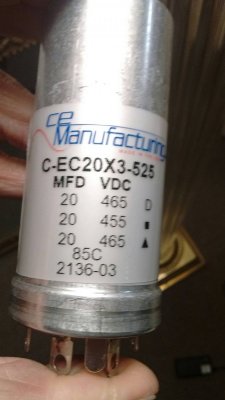 That is a 450volt capacitor. 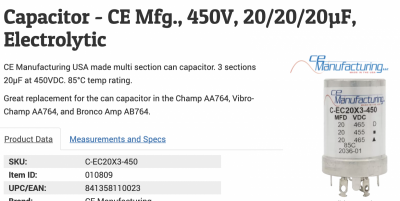 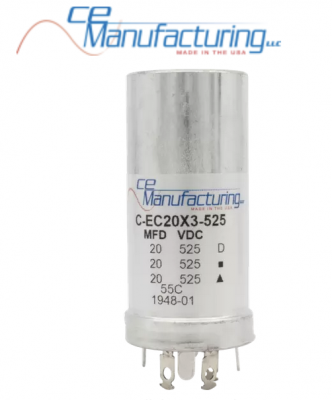 The testing of capacitor voltages is carried out in the factory before they are labeled and after the design of the wind is calculated.

465 and 525 are probably the peak voltages that the capacitors can sustain for a short while.

I always get the German made F&T cans, from Ask Jan First, they might look a bit different, but the quality is top rate. They have quite a good selection of otherwise hard to find caps. CE Manufacturing does have a nice series of videos on how they make their cap cans, and it seems like they know what they are doing.

I think you're missing the point. Other than aesthetics for vintage amps, I see no other reason to use CE filter cans. And, from my experience, they don't seem to be able to get that right.

hmmm. if that was the case you'd pull the guts out of an old mallory can, fill with ecaps & replace.

Cuz those modern graphics on a peel & stick label are offensive to my archival sensibilities. (joke).

the question of aesthetics for consumable parts on the inside of a functional device is . . . an interesting misplacement of judgment and effort, imo.

It might be nice to know if the original can was just mislabeled — or not. I get it you weren’t reassured by your phone call. We get it that things got worse from there. Your note that the original Mallory machines produce only aesthetic advantages suggests you're mad so you’re throwing their whole product line under the bus.

These are small shops working in an almost-abandoned corner of the electronics marketplace. CE has supplied lots of builders here with great cap cans. If we generalize a single — possible — QC fault to condemn their whole product line and service, we take a step toward the day that corner of the marketplace is empty.
L

I don't see it as a single QC issue. To me it shows an apparent lack of concern for your reputation when you don't care enough to make it right the second time. ie; say one thing and do another. I go above and beyond to give customers what they're paying for.

And, if I was making these capacitors I would spend the dime to package them in a cardboard box. For many years I'd bought filter cans from DH Distributors. Always first rate service and never once had a problem with anything. Was a sad day when he retired.

Were the cans mislabeled or not? Did you check the capacitance, I check all caps before I install them whatever the labeling.
I am in the process of putting parts together for one of Rob's single channel AB763 projects, but in a "tweed" style chassis. I plan on a cap cap for better use of space, plus not needing to build and mount another board and cap cover.
So far I have had no problem with CE's quality!

Mislabeling is unacceptable because 20 years from now somebody will replace that cap with another based on the label.

bebopbrain said:
Mislabeling is unacceptable because 20 years from now somebody will replace that cap with another based on the label.
Click to expand...