Bring and Take, and my children's confusion about those two words

Growing up in my family, we developed a language all our own...basically by having fun with it. I mis-pronounce Eastern and Western by inverting the last er to re. This happened way back in my childhood and is now integral. It drives Miz Diane crazy...which makes it all the better.

My Dad mispronounced my High School from Grissom to Grishum...as an annoyance for his teenager (me). After a while, he couldn't hear the difference and pronounced it that way for the rest of his life.

We hosted a young German for 6 weeks back in the early 60s and although he spoke excellent English, he had some Germanic mispronunciations of English words...which we kept. My brother (RIP) and I were still routinely using them a two years ago.

If someone had mentioned bring and take...we would have intentionally misused them, it just to annoy somebody. After a while, it would have stuck.

I think you should take and give the kid a break.

Yeah, that "take and" superfluous speech is goofy too. Lots of people do it.

OK, 'splain this to my wife:

We've almost gotten into fights because either one of us mis-interpreted the form of the question.
Or am I wrong?

In certain parts of the US, locals use the word carry in place of take, as follows: "Could you carry me to the grocery store later today?"

It means 'drive', as in a vehicle. It sounds weird until you get used to it.

Now it would not be too far from truth and reality if asked, "could you please carry me to the doctor's office?"

Sometimes people have to actually be carried to see a doctor

But on the return trip, he could only bring it back.
Which you couldn't take.

not sure he’s entirely in the wrong. he’s perceiving the object as “taking it with” him. as in “I’ll bring the casserole with me.” now if you had asked him to “bring it to connor’s house,” that might be weird, because it’s not coming to you (unless you’re going there as well). But you could very well say “bring the casserole with you to connor’s house”, no?
Last edited: Jan 22, 2022

You probably shouldn't go to Wisconsin. Your head will explode. I lived there for 10 years and the rampant misuse of words grated on my nerves from the time I arrived to the time I left. As a bonus, my eldest daughter-in-law now lives locally and has imported their strange proto-language here to Tennessee.
Click to expand...

MarkieMark said:
But on the return trip, he could only bring it back.
Which you couldn't take.


But you can take your words back - or have others request that you do so.
Click to expand...

Your son, like me (with a doctorate in Applied Linguistics) and millions of others, probably DOES have the restriction against using "take" to mean carrying something towards the speaker (*take me another beer please!) as most people do. But he does not limit the meaning of "bring" to mean only carrying objects towards the speaker. For him, and many, many other people, bring can also be used to refer to carrying objects towards a third party or the hearer. so, "?I'm going to bring John that record" and "?I will bring that record over to your house" sounds perfectly fine to lots of us, but not to you. It's an interesting little way in which native speakers of English differ, there are hundreds of others and probably many unstudied. For myself, I can understand the distinction I just explained (I teach English grammar!) but its significance / relevance is totally lost on me and always has been.

There is nothing sacred or fixed about word meanings or usage - as long we understand most of what another person says, getting our cargo shorts in a twist about subtle variations in word meaning and restrictions on word use is just a fun parlor game. Ain't used to be the proper Elizabethan English contraction for "am not" which was preserved only in the speech of rural Americans and lost to "polite" society. "Gift" was not a verb until about 25 years ago, it was only a noun. "I gifted him that book" probably still grates on the ears of a lot of older people, who would much prefer "I gave him that book." And now the rules governing third person pronoun use seem to be changing, to my great surprise (that kind of thing happens very rarely!)
Click to expand...

In this case, "Nerd Alert!" needed greater impact. May I suggest
**NERD ALERT!**

Only time I’ve worn a pair of pants was on the ski slope.
Click to expand...

Got it!
Only took me a couple days.

I like those Eagles songs: Bring is Easy, and Bring it to the Limit. Good stuff.
P

Just watch a Justin Wilson cooking video if you really want your head to spin: “…what I’m a gonna did…” (future tense?)
P

The point is, he thinks it doesn’t matter, and that’s the sad part, at least to me and in numbers of cases.

I will put you out of your misery. 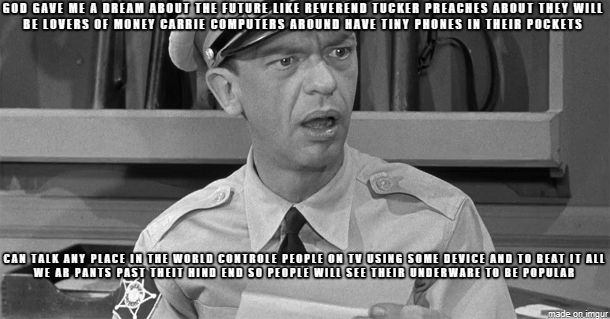 The media is teaching incorrect grammar in this case of take and bring….and also incorrect pronunciation in the case other words.
This has been going on for a while, and it is probably irreversible when you have college graduates making big bucks as writers, actors, and talking heads abusing the language.
Along with the bring vs. take issue, lens an ear as to how the word ‘for’ is being pronounced. Without a doubt, you will hear ‘fer’….or ‘fur’ depending on how you want to spell it.
These are minor issues compared to the lack of attention to facts and rules, imho, but they are bothersome.
As John Sebastian wrote: ”Go and beat your silly head against the sky!”
we are degenerating to the lowest common denominator in most respects. Repression is.

Er. No.
You must log in or register to reply here.

R
You and Me, Words and Music by Rene A