I just cut off a std tele bridge in the line of the cut out... and that's where it went... seemed like a good idea at the time because I didn't have a short hard tail bridge handy... just using up parts..

Freeman Keller said:
One heads up, Bob. The StewMac P90 is a very tight fit a cavity routed with their template (duh). The short axis is fine, the long is a hair short. I had to go back and move the template a bit to each side and relieve that. I did not check the dimensions on the template in Hiscock's book because I discovered this after routing mine.
Click to expand...


I haven't used the StewMac P90 template, but it just might be right-on for most P90's

The covers that SM uses for their P90's (like GoldenAge) have sharper corners than other P90 pickups - like Fralin's P90's, or the covers that PLS sells, for example.

I ended up using a smaller diameter bit to route for the StewMac P90 covers, and they fit much better.

From what I've seen there are at least two different type of P90 covers depending (totally? partly? maybe not at all?) on pole spacing.

Then there was Browny, the black sheep of the family..... two volumes, no tone...it's a screamer...

I took it to a indigenous friend's daughters wedding as a spare guitar where I was playing bass... his brother, the entertainer of the family and a good guitarist played this one instead of his and wouldn't give it back to me...haven't seen it since..

. I didn't make a fuss as I figured it would be easy enough for me to make another one...

I'm sure it's having an interesting life of it's own now.... @trev333 - None of your Tele's with P-90's have the bridge p/u located a bit farther from the saddles than the typical Fender saddle-to-bridge p/u distance?

I was fooled by an optical illusion caused by that angle cut on the river guitar.

btw Do you ever see a Tele or Strat plugged in and the TREBLE set at 10 on the amp? That's why I say "treble to burn on a Fender"

Initially I tried to keep the pickups around the same distances as tele pickups, as I work off the tele drawing.

I haven't got full body patterns and each pickup is placed individually on the day I rout them... I don't think 1/2" either way makes much difference...
5

Willie Johnson said:
I'm also here to gripe on angled P90's, but I do like the big worm hole/lightning scar in that last one.
Click to expand...

I'll tell you my secret method...

the correct size map, A hammer and a blunt nail, texta color and cca glue with a few sparkles tossed in.... seemed to work ok.

I made it for a kid named River....the geography worked, so I put our river on it.. 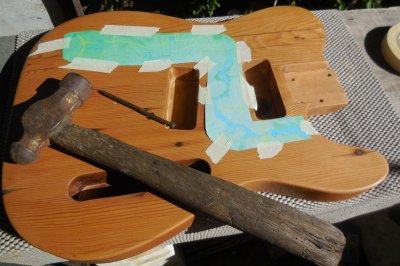 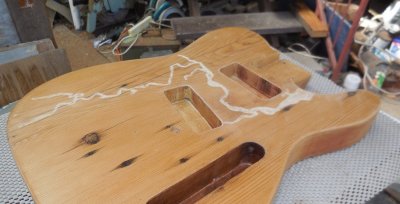 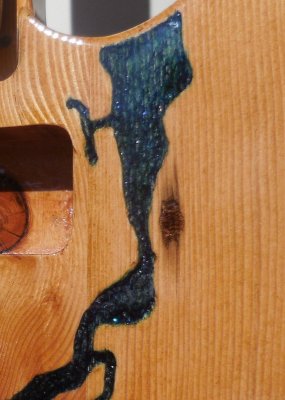 the correct size map, A hammer and a blunt nail, texta color and cca glue with a few sparkles tossed in.... seemed to work ok.

I made it for a kid named River....the geography worked, so I put our river on it.. Thanks everyone for your input and sharing. Pretty sure I know what I’m going to do…

Bob, I'll just add that I mostly think of P90's on older jazz guitars - Gibbies and Ibanez and Guilds - and I can't remember ever seeing one at an angle.
5

Mike Simpson said:
I like my P90’s straight… no chaser

I've always want to brighten up the low-end and add a little more mids to the higher strings, but in practice the Tele and Strat bridge pickups are set up to be the opposite of that and I end up adjusting the height of the high-E string of the bridge pickups a bit higher than I do with the straight mounted pickups. I think we have all grown up hearing that kind of tone and have assumed that it's normal. Everyone's ears hear differently, and while I always judge tone through a directly connected clean tone on a Princeton amp - there are great reasons for mounting pickups in different ways. For me, in practice I'm always playing with a bit of overdrive and at least one effect in the chain: So, for my kind of playing I think the pickup height alone, although it kind of just adds/subtracts volume, with overwound/underwound pickups and the tone knob it's all that's needed to achieve the same result as either of the slanted (forward/backward) pickup mounting configurations. So I just mount pickups straight these days unless it's that kind of a design. I think I’m settling on this: Actually the reason there is a slanted pickup in the tele is because that’s the pickup Leo was already producing and using in his Lap Steel Guitar he had been making since 1944. He had filed for a patent for a pickup that was attached to the bridge….the setup his steel guitars used. He had equipment in house to stamp out the pickup bridge assembly. My question is where did the neck pickup come from. I don’t see anything on that pickup. Below is a picture of the first prototype of his solid body guitar. Single pickup called the Esquire. Brother Dave, see that headstock? Leo had it right the first time. Proto number 2 had the more common headstock.
. 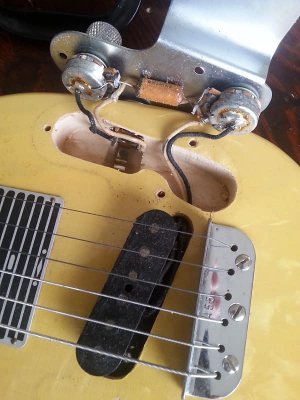 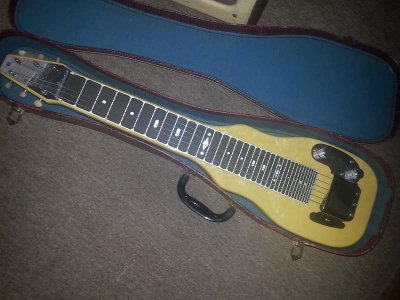 K&F were developing amp and steel guitars as a set. Those first amps were foundation of the Tweed amps, low power, low headroom. Their market was for country music players that wanted a very clean no distortion sound. I bet that pickup, both the high output and more treble was developed to help out the amp as much as possible.

The steel guitar Kauffman brought to the company K&F 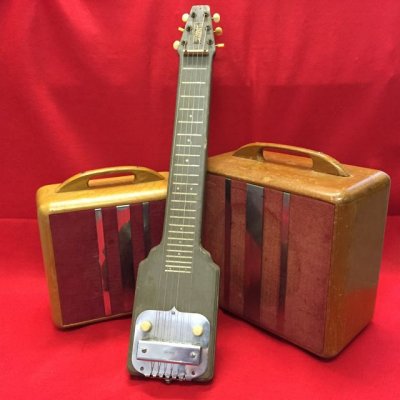 The steel guitar with the pickup Leo developed. 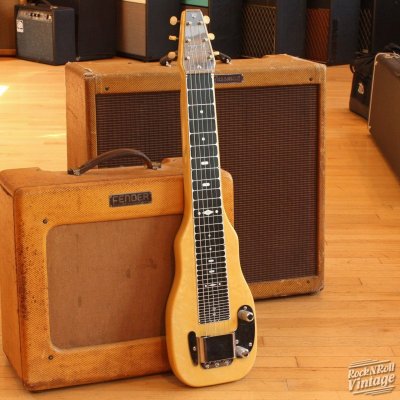 Bob J said:
Hi all, this is a sub thread to my double cut build. I’m thinking of going with 2 P90s, should I angle the bridge pickup like a regular telecaster or mount it straight across?

Show me photos to help me decide!
Click to expand...

You COULD move the bridge pickup a little closer to the bridge but I actually like it there . Most folks (used to the "LP Junior") move it too close to the bridge for the Fender fretscale. Now if you love this don't flame my butt , all people hear differently. I just think with the longer scale a Fender sounds much better with a bridge P90 moved UP. I think the top will do great for the jazzy and Motown tones I love and the bridge on bridge or middle position will have more chime rather than twang which I also love. I realize I may have turned you completely off but hope not because I look VERY forward to the sound samples. You ARE recording those right?

I go to the extra trouble to remove the angle from Tele and Strat bridge pickups.
The angle is the reason so many Tele players complain of icepick tone.
The G is warm, the B is pretty durn bright and the high E is downright dangerous.

Methods I’ve used to get rid of the angle include the Glendale Billy Gibbons Tele Strate Plate, I’ve drilled blank Jazzmaster covers to fit the longer pole spacing of the Tele bridge pickup, and put Tele bridge pickups in Strats.
No way I’d angle a P-90 but to each their own.
The P-90 pole spacing is already short compared to Fender bridge spacing, so angling it puts the poles even further in from the E string positions.

a p90 bridge doesn't get ice picky like low wind tele bridge pu's..... that's the whole point of using them...
You must log in or register to reply here.