Be honest : how many of you immediately comment on a friend’s appearance if you haven’t seen them in awhile ?

By "comments" you mean "lies" correct?

Dude could walk in with an arrow in his chest and missing a limb and I will start with "Looking good bud".

I went back to Detroit after years of being away and met up with some high school jamming buddy’s. One I hadn’t seen in 40 years was a drummer who was a skinny little mick with long red hair. Really cool looking guy in 1972. I had already told myself I wasn’t going to comment on anyones appearance but this chubby bald guy comes in and says “hi Kevin“and shakes my hand. I said hi and the look on my face must have gave me away.”It’s Don, Kevin” he says and I turned red and said “Yeah, I knew that”. We did pick up where we left off 40 years prior to that and had a great time playing.

boris bubbanov said:
I used to suggest they looked good, and must have lost some weight.

I said that to someone who had recently been diagnosed with cancer (I did not know it, and it was Stage 3 or 4 by then) and had to apologize because he had lost weight (but not in a good way). Silence is such a great option, so much of the time.
Click to expand...

It was working at the State Prison and coming in to work on a Monday morning. We all had to pass through a set of double sliding doors to enter the facility so there are a few seconds where a dozen people will be crammed into what is about the size of an elevator.

We would often find a donation can in that space for somebody who fell out of a deer stand or something stupid. It was becoming almost a weekly affair that there was a donation can present...and there was one on this day.

So, with a silent room full of people, I saw that donation can and out of annoyance asked "Who the hell died this time?". The room became very tense and I had a few people push up on me like they were picking a fight. Finally, somebody called me a dick and said that it wasn't funny.

Later, I was informed that an officer committed suicide over the weekend after his girlfriend declined his offer of marriage in front of everyone attending a wedding. He was found sitting in his new truck the next morning....used a shotgun under the chin.

I learned to just be quiet in the mornings until after my coffee and the morning meetings.

I've always loathed meanness disguised as 'good natured ribbing' or 'friendly banter'. So many people try to excuse poor behavior with "I was just joking around." But rude is rude. Even in my younger days in friend groups where this was common I never did it.

Not to mention a lot of times when someone appears cool with the ribbing, deep down they actually aren't. I just had to have this discussion with my oldest daughter. Sometimes people laugh along because they don't want to get humiliated further, or they simply don't know how else to respond. Just because someone laughs at your mean comment at their expense doesn't mean it's a free pass to make fun of them. Sad how many grownups don't seem to grasp that concept.

My sensitivity is from once being the chubby and bullied kid who fixed that. My wife's from being wired to not like attention but a life of getting it from being good looking, athletic, smart, and competitive. She's much more judgmental on this stuff than I am but I understand it.

Of course it took age and maturity but I try to keep my comments about being genuinely concerned. If I see someone who's not looking healthy, I hope I'm not misunderstood for anything but caring about their well-being.

For my wife, she was also in a poor family when young and her mom from across an ocean so there was horrible behavior stemming from that. I can understand what might sound mean from my wife when she sees people who made her childhood rough not looking so great now. That said, it won't come out verbally.

Mostly we have private comments that are often rooted in curiosity. That was for sure not me earlier in life.

I never throw shade at somebody like that, and I don’t enjoy having it come my way either. Yeah, I’m fully aware that I’m old and fat and hairline has crept a little bit backward. This is not news to me. I always say something like “you look like you’re doing really well!” Or “you look like life is making you happy lately!”.

But if I say it, it’s true. Just like nobody needs the negative reinforcement, nobody appreciates a full of crap “friend” blowing sunshine up their skirt, either.
R

“whoa Charlie ! Lotta snow on the roof these days !”

“You haven’t missed many meals !”

This is just a virtue signaling thread.

Because I never do that.

And the only reason I never do it is because I hate it when it’s done to me.

Raised in a family of nine and when you walked into a room that a whole bunch of them were in, you had your knives out because you knew there were some appearance zingers heading your way from one of them - if not three.

I’ve always thought it was lack of self-confidence on their part or feeling insecure somehow?

I think it’s totally different if we’re talking about ragging on buddies at band practice when you see them at least once a week.

But the other thing - ugh.

An old friend of mine who is most famous for it has thick black hair that has not changed in 40 years whereas mine has gotten whiter and thinner so he always leads with that where am I am at a disadvantage because his appearance is mainly the same but - I do know his liver and lungs do not bear any resemblance to 45 years ago.

This is totally unrelated, but I read today that if you create a composite of multiple faces, viewers of the resulting image rate it significantly higher than any of the originals as more attractive, trustworthy, and generally revered. I had to check that out for myself (we form a ton of our impressions of people subconsciously at first glance, and that sticks). Jeez, it seems true, however off it seems. So, just mention these studies and say "wow, you look very average since I last saw you". 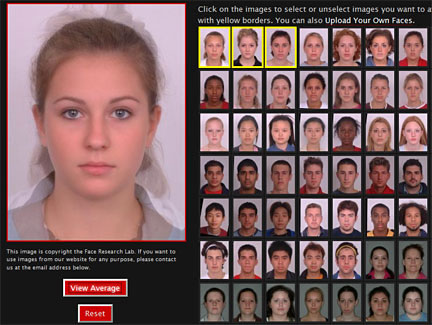 In this science project, use an online tool to build composite faces by mixing images of single faces, and have subjects choose which faces are the most attractive.
www.sciencebuddies.org

I see some sensitive, like-minded posts here. People don't need criticisms and/or negative reinforcement. It's a great way to alienate someone and sometimes permanently.

I never do it. There are plenty of other things to discuss. An entire world of stuff, in fact. Why even go there? Sports, weather, family, news etc.

Stubee said:
No, I rarely make any comment other than “yer looking good!” but my 97 YO FIL sure does. He’s always been one to make outlandish comments to family members such as “how much do you weigh now, anyway??” to a daughter who’d put on some weight. Now hard of hearing & with short term memory waning he shares comments very loudly on strangers, such as “well, she sure is large!” regarding a waitress as she steps away from the table.

Upon seeing him, you could say, "wow you haven't kicked the bucket yet? What are you, like 115 years old??"

I don't make negative comments about other folks looks and think it's pretty stupid when somebody who could use a head to tow make over starts with insults toward others. Insecurity is a ***** and they seem to think they'll feel better if they make someone else hurt.
I grew up listening to my father make fun of peoples weight (he was no Adonis) and it's one of the few characteristics of his that I didn't admire.

8bit said:
I've always loathed meanness disguised as 'good natured ribbing' or 'friendly banter'. So many people try to excuse poor behavior with "I was just joking around." But rude is rude. Even in my younger days in friend groups where this was common I never did it.

Not to mention a lot of times when someone appears cool with the ribbing, deep down they actually aren't. I just had to have this discussion with my oldest daughter. Sometimes people laugh along because they don't want to get humiliated further, or they simply don't know how else to respond. Just because someone laughs at your mean comment at their expense doesn't mean it's a free pass to make fun of them. Sad how many grownups don't seem to grasp that concept.
Click to expand...

That might be true for many, but trust me, it isn't true for military, police, fire, EMT's, etc. If I ran into a member of those groups and received a compliment, I would be shocked and disappointed.

We used to refer to it as wearing your martian skin and you simply couldn't hurt us with words. The old "sticks and stones" approach to life. Breaking balls is a sign of affection in the dark humor world.

Like everything in life, there are always exceptions to the rule and part of our education.

These pretzels at making me thirsty.

I may have told this story here before but a number of years ago I was walking into the office and a co-worker (we weren't friends) stopped me and said "TC, you look like you've put on a little weight" and I said "Bill, do you say every thought that pops into your head?"

He got fired a couple years later for general dumbassery.

Never. I grew up in a large family as well. Some of my siblings were vicious. I never let it get the better of me. I am getting older and still have my hair pretty much the same way it has always been. One of my brothers started losing his a long time ago. I have never said one word about it to him or anyone else in our circles. Same thing with my sisters and there habit of tanning and the effects.

No matter how positive & complimentary your intent, commenting on a young niece's new boobs doesn't always ingratiate you to the family around the Thanksgiving table.

But remember, I said "doesn't always..."

Only if I do so in a positive way. I’ll at least wait a bit and see how the conversation is going before I make any comments

Only in a positive way.

If I run into you someplace you can pretty much bet on me saying, ‘hey you look good’
even if you look like the guy at the end of the first Raiders of the Lost Ark.