Are my double-line Klusons really vintage?

I have a lovely old partscaster that came to me with what appear to be vintage double-line Klusons. It was purchased around 1999 and sports a very early (first year?) Schecter neck and has no additional tuner mounting holes in the headstock.

Everything checks out visually, but what gives me pause is the fact that the "Safe-T-Post" feature is a bit different on these. The hole for the string end is only about half as deep as my various other guitars with genuine vintage Klusons. None of the other guitars has the double-lines, though. Is that shallower depth a feature of this particular iteration? (I don't think any credible repros were available when the guitar was put together, presumably around 1975 or '76. That's based on the fact that the neck is marked 099 and doesn't have the letter/number designations shown in Schecter's first published catalog and pricelist.)

They're also much tighter-feeling (harder to turn) than most Klusons and have a bit less backlash.

Anyway, what do you guys think? Real deal or no?

UPDATE: I actually do have some double-lines. I thought the tuners on my '66 had been replaced, but it was only one broken one. Everything matches exactly except for the depth of the string holes, so I guess I'm still wondering. I believe that is 1964 to 69 if they are double line. It would be great to see multiple pics also.

That's interesting about the hole depth..

I bought some double lines a few years back but unfortunately the guitar they are on I sold to a mate... I might be able to check them out later in the week though. (to be clear these are new Klusons, not vintage) is there anything you want me to check or I can look for? Or do you just want me to take some pics so you can see if there's any obvious difference to yours, which might confirm yours are vintage?

Accessory 'Kluson' tuners made in Asia weren't around then except for the Gotoh-made ones used on reissue US and MIJ guitars plus the Pings which are cast and staked together, which are stamped Fender underneath with no patent no. I don't think Fender was selling them as spares but I could be wrong f you bought them then they came in a Gotoh box with Gotoh stamped underneath. I'd say those are ridgey didge.

Yeah, both sets pretty much have to be real, but they do have that different hole depth. The patent number is a little more deeply incised in one set than the other, but similar enough to be from the same tooling. The string holes are consistent within each set. One set is of unknown origin, and the others came in a guitar with an April 1966 neck date.

For now, I put the B and the E from the partscaster set on the '66 neck, and let the replacements round out the set on the partscaster, but I feel that keeping the intact set together is a good idea. I prefer the feel and functionality of the repros and the vintage set with deeper holes to the full set that was on the partscaster, so maybe I should sell the partscaster set for big bucks and keep the mixed vintage/repro set on the '66, which I will never ever sell as long as I live. I do have one more functional tuner from the '66 neck that's just slightly bent, so it could live with just one repro (no prizes for guessing which one broke, because it's always the same one).
Last edited: Apr 19, 2022

The tuner pictured in post #1 appears to be legit.

Although they were discontinued on Fenders in 1968 the 'double line' Saf-T-Post tuners were still available from Kluson until around 1981 when they closed shop.
The Kluson tuners did reappear on some short run Fenders around 1980-81 before the style was replaced by the Gotoh copies for the reissues in 1982.

I've got examples on hand of each of the variations described.
They match exactly - both the hole depth(s) and the appearance of the patent stamp(s).
One set I have is from 1965, the others unknown.
My deduction is that one style is from early in the production of 2lines (1964-1969), the other from later after Fender switched to Schaller but before the end of original Kluson production. Here's a shot of the slightly bent 1966 tuner. I'm not sure why there's a tiny sliver missing from the side. The letters and numbers are a little crisper and not imprinted quite as deeply. The 9 and 6 are also slightly different shapes; there's more space between the loop and the tail. Not sure if there is any information on this site that could be helpful. http://www.guitarhq.com/kluson.html

Also, reproductions use a nylon bushing that is visible at the end of the tuning button shaft. Vintage tuners are all metal. 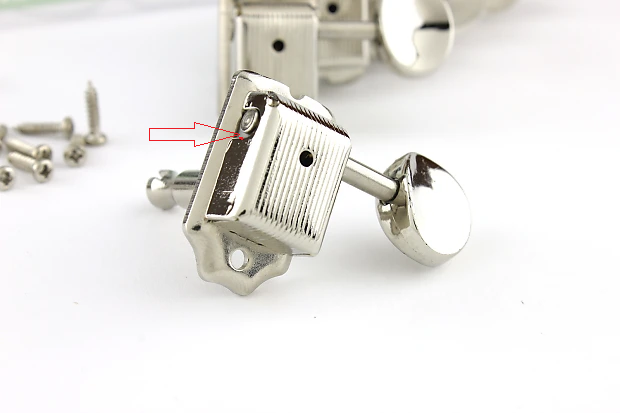 stormin1155 said:
Not sure if there is any information on this site that could be helpful. http://www.guitarhq.com/kluson.html

Also, reproductions use a nylon bushing that is visible at the end of the tuning button shaft. Vintage tuners are all metal.
Click to expand...

Thanks for that link, I had no idea about any of this stuff...

"The original Kluson tuners company went out of business in 1974 so this style of tuner was not made again until the 1990s when WD Guitar Products bought the Kluson name (and reissued these tuners)."

I've bought a couple of sets of Kluson from WD, they still make them now, single line/double line/on a plate/plastic button/whatever you need.

I had no idea that kluson wasn't actually kluson any more though... or that WD owned the same, I just thought they were the UK distributor or something!

The end of that shaft is also a different diameter, and it protrudes out of the case on the originals. It's flush on all iterations of the repro/modern ones.

Modern on the left, original on the right. The front side exhibits differences as well. The originals have a deeper slot, regardless of the depth of the string hole. The repro button also has a visible seam.

(Which repro? WD, "real" Kluson, Gotoh, Goldo? I don't know! I bought them a long time ago, so I know they're not Goldos. And they're single-lines.)

The shaft diameters are different, too. The originals are .252" and the repros are .235". (Here, just to confuse the viewer, the original is on the left and the modern on the right.) To further complicate matters: I've taken apart two modern versions, and the innards are incompatible. I may dissect one vintage one, since the button snapped off and it's unusable. Then I can see if any parts are interchangeable.

Sea Devil said:
To further complicate matters: I've taken apart two modern versions, and the innards are incompatible. I may dissect one vintage one, since the button snapped off and it's unusable. Then I can see if any parts are interchangeable.
Click to expand...

That would be interesting to see. I've never actually pulled one apart, but have often wondered what the modern vs. vintage look like and differ outside of the nylon bushing etc. Looking forward to your pics on that!

A modern key and shaft fit inside a vintage housing and turn nicely. If this assembly can be remounted onto the modern plate, it bodes well for the prospect of replacing the guts of a vintage tuner while retaining the casing.

The originals don't have screws on the shaft, so the gear can't be separated an the shaft isn't removable except by grinding off the end. I may try that. This gear is trashed and doesn't mate with either modern shaft. Here's as far as I got with the effort to mate the vintage base plate and cover with the modern parts. It looks good at first, even sticking out a little on the non-button side, but the shaft with the tuner button is .010" too large to close the cover. If I could come up with a way to spin it, I'd grind it down and call it good, but I don't see how that would work (EDIT: maybe wrap the shaft in tape and chuck it in a drill?). So close... I might try to do it by hand, but not now.

The little nylon washer is even bigger. No realistic ideas about how I could reduce its size; it could only be removed by cutting. It's just a spacer, though; it doesn't need to be perfectly round.

If this could be made efficient and repeatable, it would be a real boon to restorers. That seems to justify the effort.