I'd guess that those neck-through guitars were made on the same like as the Aria Pro's. The construction and wood selection sure look the same. That's a brand I've never come across before. Just when you think you've seen it all...
C Just picked this up at an auction for 140 Canadian. Don’t know much about it but it’s a decent guitar. Doesn’t seem to be much out there about it but thought I would put up a picture and see if anyone has any insight if I got a good deal or not. I certainly feel like it was a great deal but no solid info about it

In 1992 I'd been playing BASS for three years when i decided to teach myself to play guitar too. I walked into Songbird music in downtown Ottawa and bought a used black guitar for a hundred dollars. And i fell in love with that guitar. No other guitar I ever played or bought ever sounds as good as that guitar in my hands.It is irreplaceable to me . It has a beautifull loud warm bassy tone. Sound men love it , electric guitarists hate plating it (ha!) I'M a BASS player;its strung with medium gauge strings.13 on the high E.

15 or 20 odd years ago I put a picture of my black ALCIVAR dove copy on a couple of guitar sites looking foe info about it and the company. And that search for my guitar was probably the one stefano biondo saw.suggestions that they may have been related to Ibanez where a reasonable assumption but i never found a real link then . Every now and then though i would continue my quest;and thanks to google search the world wide web and used guitars stores selling online it all came together finally...After hunting for clues and piecing together random facts...

ALCIVAR guitars is the Canadian Market name put on guitars
MADE BY KISO SUZUKI.
My beautifull awesome sounding black Dove is an Alcivar W-65BK. 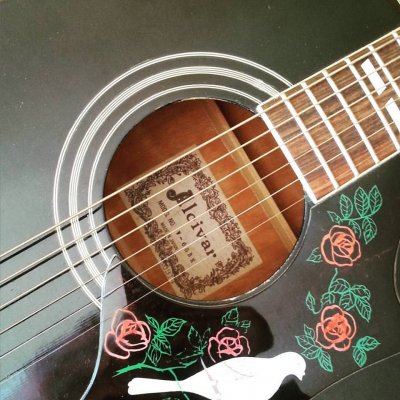 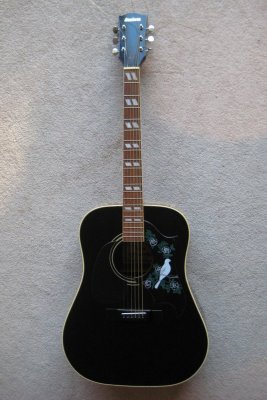 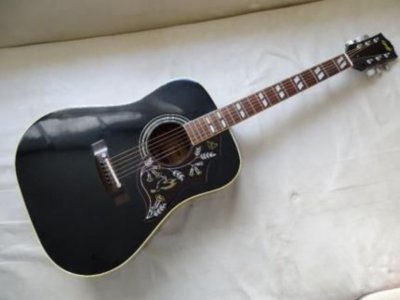 and probably under a few other brand names including Suzuki's own. also made in cherry burst and natural finish the biggest difference outwardly being the bridge some of the earlier ones (i think) have the more ornate gibson styled bridge with inlay doves .some have the height adjustable bridge like mine. and some an ordinary solid bridge.
( My Aria 12 string has an adjustable bridge too so that lead me searching down Mastsumoko road but it was not the way. i did learn a lot about Japanese guitar history thoo. I the adjustable bridge became a common feature on many made in Japan guitars in the late 70s .It is a cue i look for when scanning the walls in used guitar stores those guitars if they have been treated well are worth checking out .some of them are great sounding well made guitars. Theres a reason gibson sued) Besides the Dove model Kiso Suzuki also made Humingbirds (note the block inlays instead of split parallelograms).
A Hopf Humingbird has the model #FW912 so i would suspect that number is also common among the brand name variations. 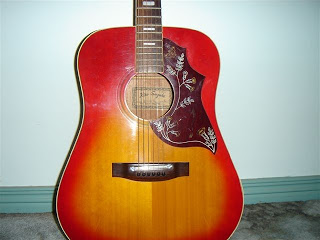 Now i dont know anything about the Alcivar electrics I've seen a few some looked cheap,some looked really nice; but my quest was for the acoustics.I would love to get my hands on one of the Alcivar resonator guitars but I've only seen them online.
In fact I had never seen any other Alcivar acoustic anywhere but online until the day i saw this on facebook marketplace. I didn't even think about it...I called the guy, I meet him the next day, I played the guitar for two minutes and i gave him a hundred bucks.
My newest old Japanese guitar is an ALCIVAR K100W.is in every way near identical to my Dove . IT FEELS THE SAME. IT SOUNDS THE SAME. It was made in the same factory, out of the same wood, probably by the same kraftsman who made my dove at around the same time. (They have the same hard v neck shape ,same tuners,same finish) the difference though is this one has a Martin style headstock ,dot inlays,and an ornate wood rosette.AND it looks like a sister guitar to that 12 string posted above by Chachi.
And MY first thought when i saw that was
"Whats the model number on the label Chachi?!?" 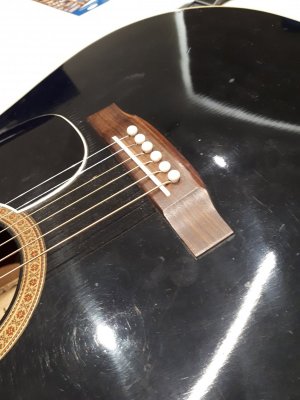 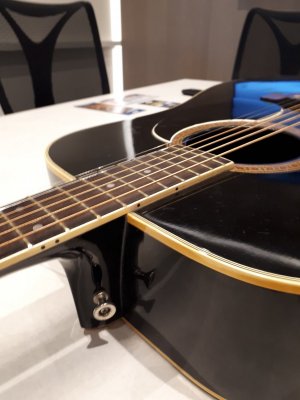 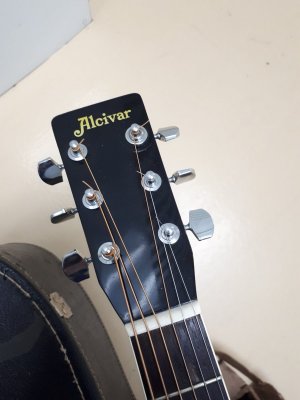 oh by the way...here's my Telecaster I bought this in 1975/76. Been through a few storms but still performs. Notice the “Les Paul” name used.

Surfed my way here on a Google wave looking for Alcivar info and thought I should add my own since this seems to be the most complete archive on the web. Bought this Paul copy around '83, it was used at the time so not sure what year it was made. Was my first electric and I played the hell out of it until the late 80's when I drifted to other guitars. Just recently pulled it back out though, refretted it and added the zebra's (originals were TWB-20's). It is truly a great player! Good to have it back in the stable. 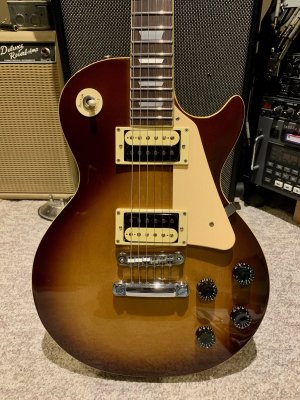 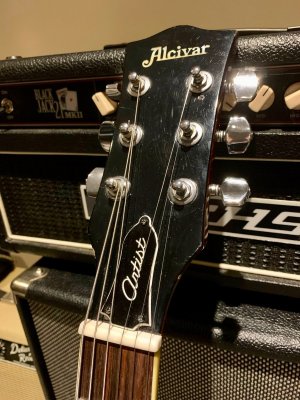 Noizemaker69 said:
Surfed my way here on a Google wave looking for Alcivar info and thought I should add my own since this seems to be the most complete archive on the web. Bought this Paul copy around '83, it was used at the time so not sure what year it was made. Was my first electric and I played the hell out of it until the late 80's when I drifted to other guitars. Just recently pulled it back out though, refretted it and added the zebra's (originals were TWB-20's). It is truly a great player! Good to have it back in the stable. View attachment 818444 View attachment 818445 View attachment 818446 View attachment 818447
Click to expand...