Hope this isn't in the TL;DR category, but I wanted to provide some insight into a mod on a popular clone guitar brand.

I bought an SX STL Ash Tele back in 2010, worked with it for a while, did some minor mods (better tuners, lighter bridge saddles), then, for reasons too long to explain, stopped playing for some years. I gave the guitar to my brother-in-law and he ended up hanging it on his wall, rarely touching it. When I began playing again last year, he offered to give it back. I really like the guitar; it's got a nice look, the ash body is a bit heavy for my old back, but the neck feels really nice in my hands.

First thing I noticed when plugging it in at home again was the mediocre sound from the pups and the scratchy pots and switch. So...new project.

I built my pine Esquire partscaster last year and went back to the sources for those parts: a set of Pretzel pups from Bootstrap and a standard Tele control set from Dave Starr. I I ordered a Fender control plate that would fit Dave's CTS pots and figured I would work around any mounting issues. (More about that coming).

My first discovery was under the bridge plate. This is five-hole plates found on a lot of Chinese-built clones, and apparently, whoever drilled the holes managed the drill the top left one off the edge of the bridge pocket (image 1 - must have been done on a Friday at 5:00). The other four holes were good, so I figured I could deal with it. Read many suggestions on this site, but decided to keep it simple and use some DAP plastic wood filler. The hole would be hidden and I only needed for the filler to hold the screw. The second photo shows how it looked with the filler in and the plate in place, prior to the screw.

Of course, when I lined up the Fender control plate with the holes, the lower one was off just enough to require filling. The upper hole didn't have much leeway, as the new plate sat really close to the stock pick guard. DAP to the rescue again. The third pic shows the result with the plate in place. I was able to remove the excess filler below the plate pretty easily.

The Bootstrap pickups arrived and I began wiring them up. I added copper tape to the three pockets and started wiring up the pups. Got everything done, installed a string, plugged in my little Mustang Mini and tested. Neck pup was fine, but nothing from the bridge. Checked everything, but all I could ever get was some hum from the circuit, but zero response to the string. I swapped the pup wiring around on the three-way switch to make sure the switch wasn't bad, but it tested fine.

Contacted Bootstrap and Ryan responded and told me a replacement was on the way. This took a few days, and I got really busy with work and other stuff. When the replacement arrived, I jotted the word "new" on the box and left it on the workbench. When I finally got back to it this weekend, I wired up what I thought was the new bridge pup. Still nothing. I put things aside for the night. I figured I could email Bootstrap in the morning and even ask for some advice in the forums here...I mean, I had to be doing something incorrectly, right? What were the odds of having two bad bridge pickups?

Early the next morning, I was read something on this site that had me back out to the garage to look at something on the pickup. I happened to look at the stacks of stuff on the bench and noticed the Bootstrap box with "new" jotted, sitting where I placed it a few days before. Apparently, I never actually took the new pup out of the box, thought I did and just wired the bad one back on the guitar. This is the "old-age dumbness" referenced in the title.

I wired up the new pickup and, as expected, everything worked fine. I reassembled everything, installed a new set of Stringjoy 10s, plugged in and it made a beautiful noise. I gave the strings overnight to stretch some more, and I see a little bow in the neck (the old strings were 9s), which I'll straighten out in the morning. I expected to have to do a new setup, especially after adding the heavier strings.

The improvement in sound with the Bootstrap Pretzels and Starr's controls is wonderful, like giving it a new life. I'm going to have fun playing this thing again.

That's my story and I'm sticking to it. 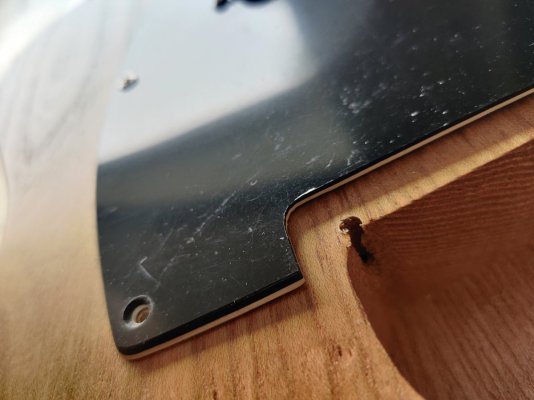 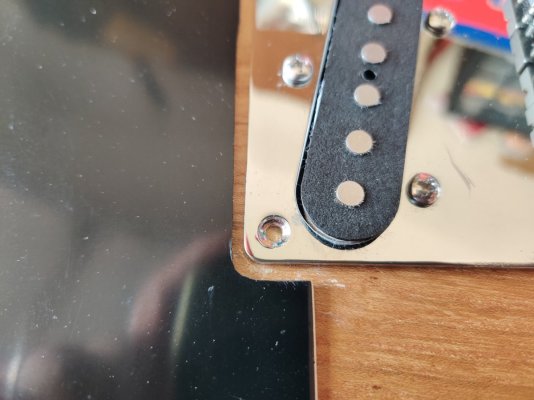 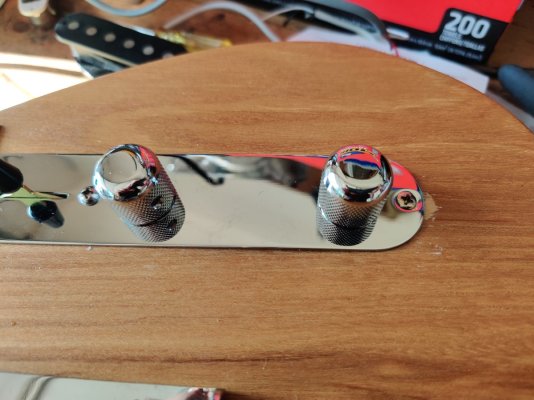 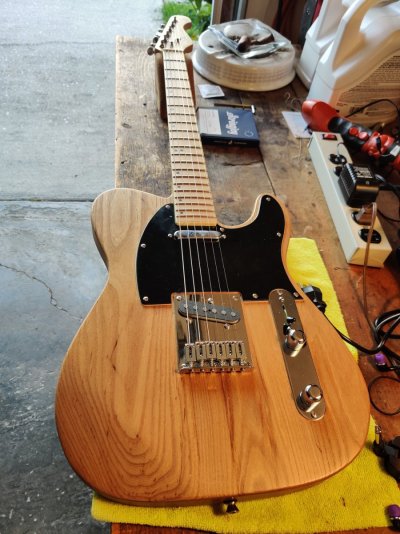 Glad you got it sorted out. Enjoy it!

Well done, looks teriffic - it's always great to push through the rocks that life throws at you. Makes the result even sweeter!

I had good luck with an SX Liquid. Great modding platform.
H

Any plans to address the weight in the body? You could always hog out the back with some speed holes.

I thought old age dumbness was supposed to be assigned to me?

I find the body on my SX STL too light. Mine's not ash though.
J

I have had 3 of the older style STL's and one newer one (with the thinner body, diff headstock and staggered string through ferrules). Still have 2 of the older ones, which have been heavily modified to accept vintage spec Fender bridges/hardware, F style headstock reshape, etc. ..... and are now Esquire clones. Was a lot of work to install vintage bridge in the proper position with relocated string through holes, but they came out great. These SX guitars are a wonderful mod platform for fun and satisfying projects at low cost. Not sure about what are currently available but the bodies and necks on the older ones seem pretty good quality and respond nicely to some effort to polish frets, address nut issues(if present), and upgrading electronics. They are especially good mod platforms if you can find a used one for cheap. I bought one for $65. It was a horrid greenish yellowish white color but fully functional. It's Sherwood Green now.

This reminds me that I have another project guitar stashed away. It is a close (cheaper)relative of the SX. I bought it a couple years ago from Rondo Music. Don't remember the "brand" - headstock is plain. Headstock, dimensions, hardware, tuners, etc. all look just like the SX and it is likewise MIC. However, the neck and headstock look like a clear sealer is applied rather than the heavily tinted poly on the SX. Also, the fretboard is some kind of "rosewood" that actually looks and feels very nice. Much nicer IMO than the Indian Laurel boards I have seen. the one other feature that caught my attention is that the bridge is a vintage style 3 saddle top loader. This one will also probably become an Esquire clone too, but reminiscent of a 1959 with its rosewood board and toploading bridge.

I bought one of those contoured solid Ash SX Telecasters and all I had to replace was the neck pickup and, well, I didn't like the neck and frets so they went out the window too. Otherwise it's a wonderful instrument, really, really beautiful to look at.

What kind of pickup was the bridge pickup? Was it this kind? This was stock on mine. Best tele pickup I have ever played, but I've only tried about 5 tele pickups total on different guitars.

I've purchased a lot of different Tele pickups, all the big names, DiMarzio, Duncan, Fralin, and also some "boutique" ones, and none have been any better than the Bootstrap Extra Crispy for Tele pickups I have in my mutt partscaster. I see many here have the Pretzel's and like them just as much. Can't go wrong with Bootstraps, no affiliation, I just love his pickups.

We have all made those kinds of goofy mistakes from time to time. I had bought a few of those SX guitars over the years, and I thought they were really good for the money (around $99.00 at the time). However, I found them to be a "mod trap" as they had specs that were different from USA specs and the stuff you had to replace was really expensive. Before long, you were into it for a few hundred dollars more and still it was a $99.00 guitar. I quit buying them after dealing with that and I came to a personal conclusion that I was better off building from scratch and ending up with a guitar that I was really happy with. It's best that you do as little as possible and that's where their value is.

radiocaster said:
What kind of pickup was the bridge pickup? Was it this kind?

This was stock on mine. Best tele pickup I have ever played, but I've only tried about 5 tele pickups total on different guitars.
Click to expand...

Is that a magnet or piece of foam on the bottom of the pickup?

MickM said:
Is that a magnet or piece of foam on the bottom of the pickup?
Click to expand...

Magnet. It's been a while since I removed the bridge, I think the bottom plate also has a rectangular hole for that magnet.

TX_Slinger said:
I had good luck with an SX Liquid. Great modding platform.
Click to expand...

I've done way more senior stuff than that, my life is a catalogue of catastrophic events as regards to guitar pickup replacement. Enjoy your new revitalised Tele. Looks fantastic BTW.
You must log in or register to reply here.

P
Was gifted a Tele body and built my first T style. Anyone know the body maker?