About Fender Telecaster reissue 1952 : how can you know or see differences between a Made in USA, or Made in Japan ?

Hi lovers of the Fender Telecaster, I was wondering if there are some remarkable differences between USA or Japan made? Can someone among you help me out please ? I don't know what mine is ? Thanks a lot ! 1st thing I noticed was: on the US 52's, the serial # is stamped on the 3 saddle bridge plate under "Patent Pending".

Anyone can correct me if I'm wrong.

edit: I have a 52 hotrod and mine has a 5 screw pickguard. don't know if this applies to the 52 either. The 5 screw pickguard and pre pure vintage the serial was on the bridge. In addition they used flat slot screws for everything on the 52s no phillips.

Great article about changes over the years

This shows the flat slot screws instead of Phillips.

Hi, thanks for your reply in the meantime ! Cause there is a lack of a serial number on the bridge and the use of philips screws may it possibly be a sign of being a made in Japan, reissue 1952 ? Regards

I doubt a USA Fender would have those pots. They look like Alpha pots with a different logo.
Last edited: Jun 29, 2022

I agree with Boreas- pots don't look right for USA

I’ve seen and replaced a dead bridge pickup on what I believe now to be a Japan ‘53 RI Tele. I don’t think my buddy still has that Tele, but I kept that dead bridge pickup. I put in its place, what was a new US-made OV 52 pickup. That suspected old Japan pickup had skinny plastic coated leads, instead of push-back cloth covered leads.

Incidentally, I later bought some pickups (eBay or here, don't remember exactly) that reportedly came from a paisley or flower MIJ Tele, and the bridge on it was like the old one of his. I used that good bridge pickup briefly and liked it enough to keep it in a box for later use. I can get the set out and post some pics if anyone is interested. The bottom one came out of my friend’s 52RI (naturally well aged!), the top two I bought online, advertised to be from an MIJ Tele.
Last edited: Jun 29, 2022

Mostly the Japanese guitar will say 'Made in Japan' for up to 1997, 'Created in Japan' for 1988-2007ish and then 'Made in Japan' for 2008-on on the neck heel. Often there'll be a serial number - on some 80s MIJ they had an alpha-numetic like Annnnnn on the bridge. US reissues always had just a four or five digit number on the bridge. The four digit date reissues which were only on very early guitars had a simple next to the number so noone could misrepresent it as a genuine vintage.

Mexican and Korean guitars IIRC just have a 'Fender' stamp on the bridge with serial on the back of the headstock. Some MiJ teles have US fibre bobbin like Texas Specials pickups. If you're looking at one with plastic bobbins it's a MIJ or MIM.

Of course Fenders can have other bits fitted so if looking online always ask for photos of neck heel, back of headstock and if possible under pickguard and inside control cavity.
Last edited: Jun 29, 2022
A

Hi, already a great thank you to all of you ! I'll have to do some more research on the coils of the pickups... It's still hard to distinguish because the American and Japanese 1952 reissues have a very similar look...There is also nothing written on the chrome neck plate. What I can say with certainty is that the initials TG on the arm refer to Tadio Gomez who was a workman at Fender at the time. Here's another picture of the electronics. Best Regards,

er, Tadeo Gomez died in 1986, he wasn't shaping necks for Fender in the 1990s. Those markings don't resemble MIA or MIJ fenders, I'd say you have a (good quality) aftermarket neck there. If I had to guess I'd say it's a well made partscaster with some genuine Fender hardware.

MatthewK said:
er, Tadeo Gomez died in 1986, he wasn't shaping necks for Fender in the 1990s. Those markings don't resemble MIA or MIJ fenders, I'd say you have a (good quality) aftermarket neck there. If I had to guess I'd say it's a well made partscaster with some genuine Fender hardware.
Click to expand...

Pretty much agree with everything you said....

But they were pencil and not dug into the wood, that appears to be pen that took quite some persuasion to take (or is it pencil.. still incorrect) if my memory is correct they would put the date on before finishing

Even if by coincidence there happened to be a Japanese “T.G” they never put names on them

It Would also have markings in the neck pocket

Yep, I have a Japanese "52 reissue" (never marketed that way but the model is TL52) from the late 80s. It has the model number as a rubber stamp in the neck pocket and under the heel (plus the odd letter and number), it has slot head screws throughout, a heavily rounded transition at the back of the headstock, metric pots but not Alpha, and plastic pickup leads. Other MIJ Fenders I have from that era have faint pencil dates on the neck heel, under the lacquer, and always only the date (in month-day-year format). Sometimes it's the Western year, sometimes it's the Showa year , but there are never any initials.
For what it's worth Tadeo Gomez quit making necks for Fender around 1960. He was re-employed in the CBS era but working maintenance, not making guitars, and left in 1969. 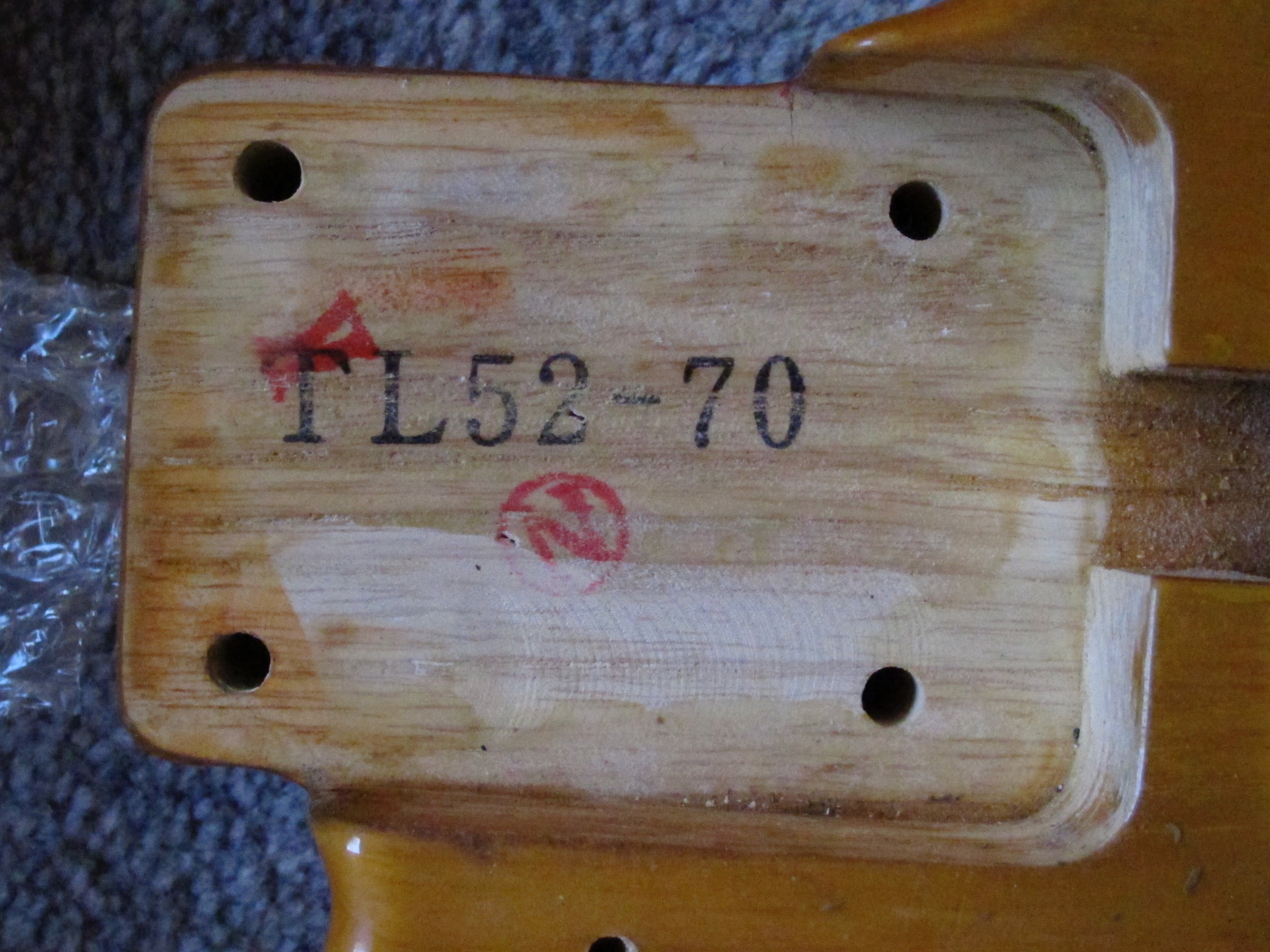 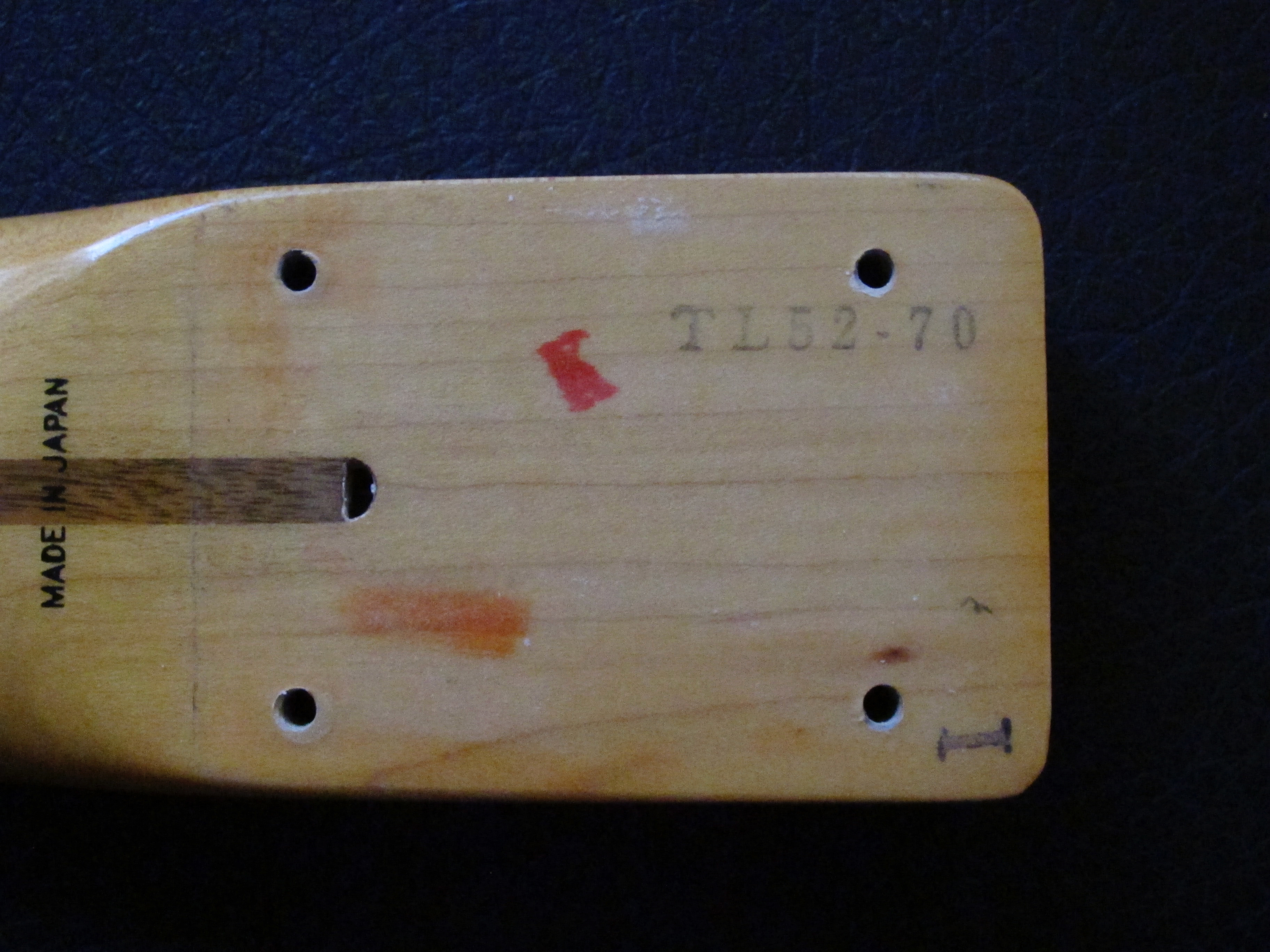 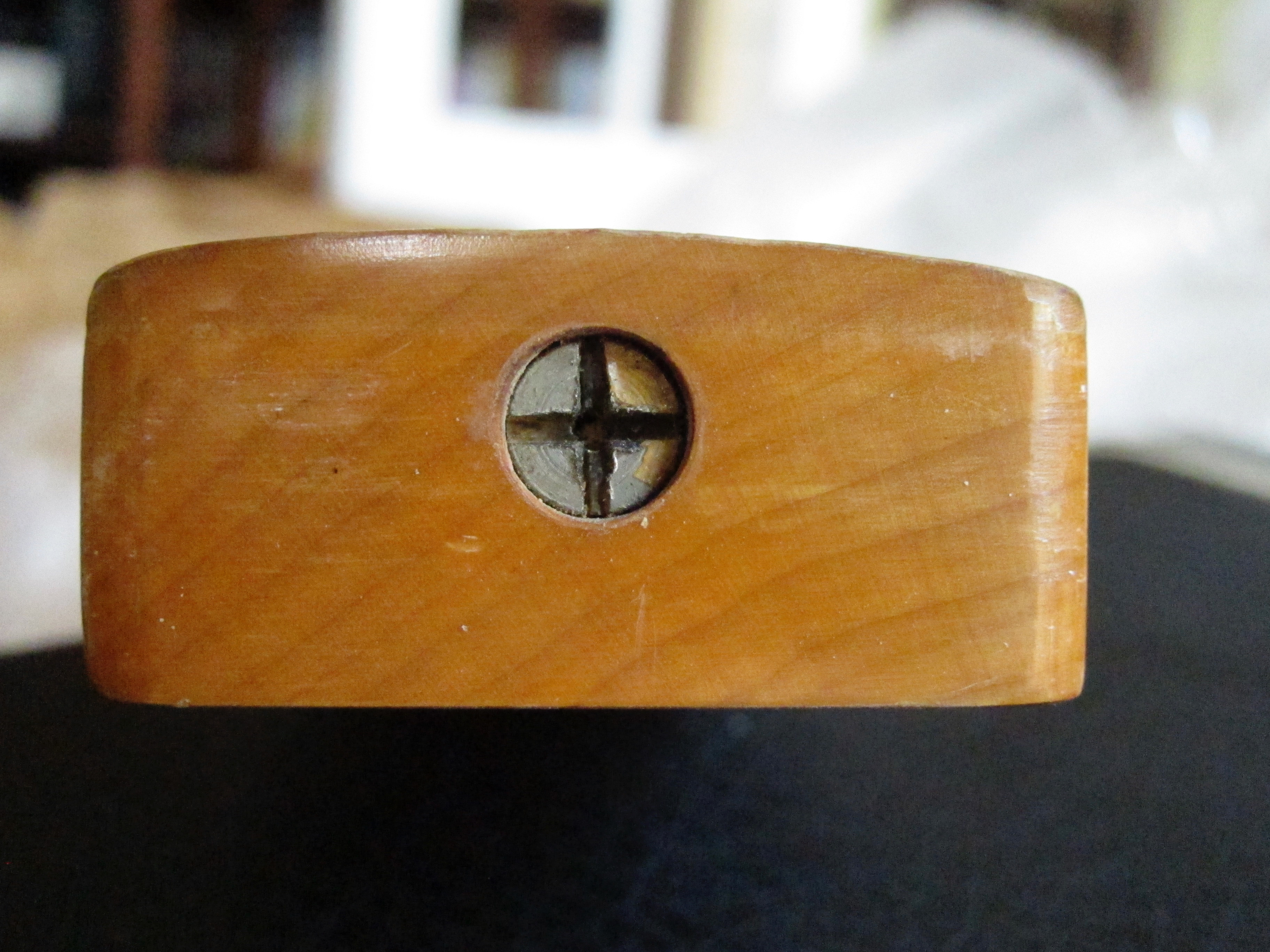 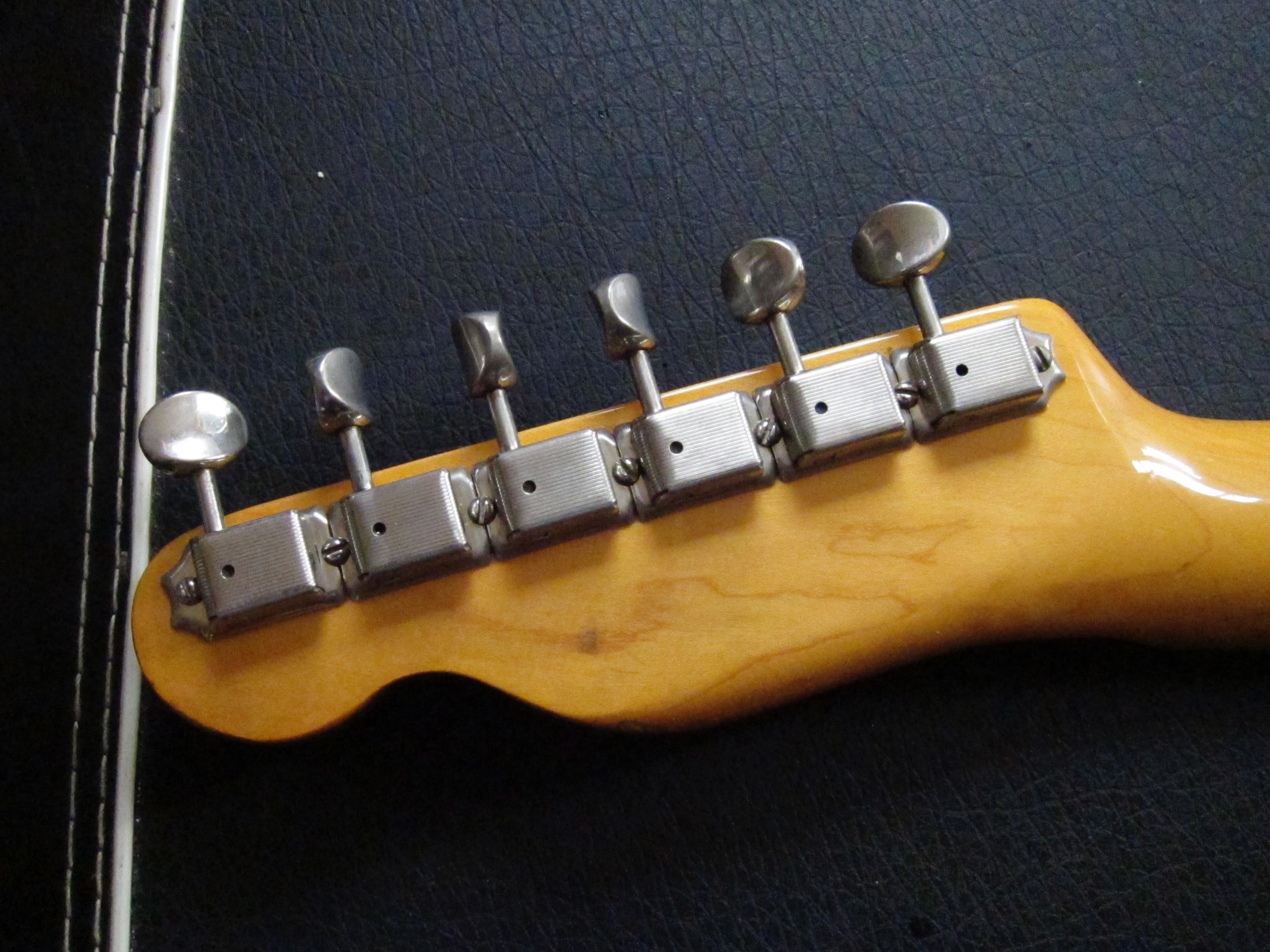 Your guitar has Alpha pots so it's MIJ

They are made very well, but you can easily tell where they are made. For me (other than the crafted or made in Japan logos) you can spot one by the electronics. Different pots and switches.

Unless it's a partscaster, like this clearly is.
A

Thank you guys, giving me all this interesting info ! However, I've applied "TG" for the neck as perhaps a reference to the style of the Fender necks as he shaped them when he was working with the company... It is also curious that the date is written on the neck, and do not have the stamp as you can see in the pictures of MatthewK (thanks!). But Fretting Out's statement about this may be correct! The neck pocket is blank, there's nothing written or stamped on it. The guitar weighs 3.625 kg. I am adding a few more photos. Have now also discovered a stamp on the back of the pearloid pickguard, but this could be fake?

It's not a CS guitar, probably a CS pickguard, maybe....

That's a fine example of Fender Japan's wood working, with replacement parts.
You must log in or register to reply here.

F
How do I know if this is a Fender or a Fernandes or other made in japan telecaster pickup?

Jun 18, 2022
Coolehandluke
C
R
“Relic”, “T-type” and some other helpful tips and tricks to I learned visiting the Chinese guitar market.
2 3