@Powdog Note that OP has said he wants to use 6L6 power tubes.
P

chas.wahl said:
@Powdog Note that OP has said he wants to use 6L6 power tubes.
Click to expand...

Well, I think he mentioned that the PT is DESIGNED to run 6L6s as well but the pics clearly show 6V6s. Never said he wants to. All beside the point; there’s some DC coupling going on and one of the trannies should be reoriented.
C

I want the option to run them in the future, I've just started out with 6v6s to get to know the circuit as intended. I know the Transformer will have better regulation of HT voltage under load than the originals, but that's the tradeoff I was happy with.

And yes, I know one of those transformers needs to be reoriented - I pretty much knew that in the opening post!

What I'm interested in is *why* these two transformers should be that way when others aren't - what are the variables? No one's really tackled the cause - only the solution, which I think we're all on the same page with.


In my searching, I've found someone in France who had the same issue a couple of years back using the same OT as me, but he later said he'd found out it was just in his house, which doesn't make much sense to me. Another guy here in the UK has replied on a different forum saying he's got the same issue with a regular-sized Power transformer made by the same company that's made this one.
Last edited: Dec 1, 2022

CirrusBand said:
the OT is already 90 degrees out of alignment with the PT in terms of both the iron stack and the bobbin wind
Click to expand...

Have you tried rotating your PT by 90 degrees? It doesn't seem to be correct the way you show it. In your PT the copper foil indicates where the bobbin is aligned to, yours seems to not be in 90 degree offset with your OT 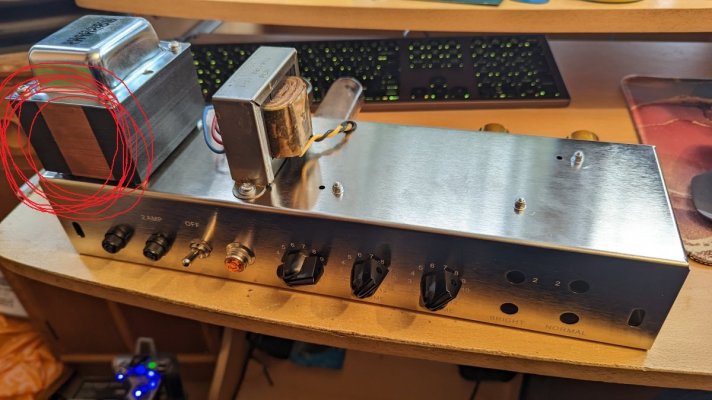 This copper foil should be facing towards your OT.

Hmm -- Fender and every "vintage-style-correct" 5E3 chassis I've ever seen has the PT cutout & mounting holes with the short side of the laminations (the side with copper band) oriented toward the long edge of chassis, and the OT mounting holes in the same position as shown in the photo above. To mount the PT 90-degrees from that requires significant surgery, and while it might be slightly better in terms of the field leakage and coupling potential (as I pointed out in post #19 above), it's probably not going to be something @CirrusBand is going to want to do. Reorienting the OT is a much more practical solution, if that works.

BTW, having read a lot of discussion about OT orientation and hum, my recollection is that the position and angle that results in the least hum is often surprising (to those who do the "headphone test" or do the exercise with a fully functioning amp), and even counter to all the theory about what should be the optimal relationship between PT and OT.

Here's an old/new thread that bears some relation:

In doing research for a fairly simple amp build, I've come across something that puzzles me. Please take a look at the following 4 items: From Merlin Blencowe's Designing Power Supplies for Tube Amplifiers (no longer in print, but available electronically through B&N, and in bits and...

Chas, I think you're on to something. But is it the short end / long end thing, or is it the way the core is oriented? If I'm seeing straight (rare but not impossible), the Crouch diagram from that other thread... doesn't actually show the orientation @CirrusBand found to be quietest in his post 9... but if Crouch's 'lines of coupling' are correct as drawn, this 'odd' orientation might be consistent with his article...

I won't belabor this, but (@King Fan) take a look at my most recent post in that thread (today, #14) to see my take on the Crouch diagram (I have thunk about it, even if in error). I don't believe that the photo above represents any of his configurations pictured, but I like the rotated OT, and as I suggested above, if it works, then an angle mounting bracket is all that's needed.

chas.wahl said:
I don't believe that the photo above represents any of his configurations pictured,
Click to expand...

King Fan said:
...doesn't actually show the orientation @CirrusBand found to be quietest in his post 9...
Click to expand...

LOL, that's what I was saying.

There are a few ways of orienting the coils internally in an EI transformer. My guess is that you have some sort of parallel orientation going on with both of them mounted in the original position.

I could not get the hum to stop any way I oriented the transformers, finally found an arangment that worked.

Obviously I did not use this mounting.
C

Just to follow up on this, for the inevitable guy 5 years from now who's encountered the same issue and found this thread in a google search... I got in touch with the PT winder, who very kindly offered to make me a second PT. I honestly don't know what he did differently, clearly something in the internal pattern of the wind was changed, but the details are hidden behind the laminations etc. They look identical cosmetically.

but... the new PT fixed it, minimal hum now and I'm very happy.

Glad you have things sorted!!!
You must log in or register to reply here.