I'm looking into this power transformer that I got out of a 1950's Capehart-Farnsworth radio / record player. I was initially considering it for a tweed champ or 18w Marshall build but am now thinking of trying the power transformer in my tweed deluxe clone (it fits the cutout in the chassis exactly). I have a classic tone in there now and voltages seem okay. But curiosity will be the death of me and I can't help but wonder about how it will sound with lower voltages. It wouldn't be too much hassle to swap it out but I want to make sure I don't blow up my amp in the process.

I wired up the primary of this 50's PT to the wall @ 119VAC and took AC readings off the high voltage line, which came out to 330VAC to center tap. I guess I'm not sure what that will result in when under load in an actual amp circuit. Ideas? I haven’t had a second cup of coffee, but my animal hindbrain is trying to say 330-0-330 nominal, with enough current to drive all those original tubes, isn’t gonna rectify and load down to 'lower voltage' in a 5E3. Could be wrong, for sure. Which ClassicTone is in there now, and what’s your B+?

I'm still learning about power supply design, but I agree with @King Fan that I would expect the voltage to be higher in the 5e3 than in the original radio.

Additionally, you specified (in two places) that you were measuring the output with a DC reading. Did you take an AC or DC measurement? Did you have it hooked up to a rectifier?

I will take the VDC reading as a typo.

This transformer will handle the voltage and current demands of a 5E3 ime. The original circuit has two 6V6 in cathode bias just like a 5E3. Plus it has several more tubes than the 5E3.

The 330 VAC reading without load will result in an unknown B+ at this point. I bet this PT will be in the ballpark but... even if the B+ is low a different rectifier tube can be installed to bring the B+ up.

I like using old iron in builds. Go for it.

Lowerleftcoast said:
I will take the VDC reading as a typo.
Click to expand...

gigante said:
Did you take an AC or DC measurement?
Click to expand...


King Fan said:
Which ClassicTone is in there now, and what’s your B+?
Click to expand...

I agree with @Lowerleftcoast -- you should try it. If your old PT has tons of current available, your B+ may not drop as much due to load, but why not find out. If you do get your B+ down, FWIW, my 5E3 running on my 'vintage voltage adapter' at ~114V sounds great at B+ ~350.

King Fan said:
If your old PT has tons of current available, your B+ may not drop as much due to load, but why not find out.
Click to expand...

I've gathered that having excessive current from a PT can also direct the sound away from sag and note "bloom" to a stiffer kind of response. I definitely prefer the saggy feel. So aside from getting the B+ where I want it I was concerned about this PT having too much current. Is there a way to calculate for certain what the current is?

Sorry, we're going above my paygrade. Maybe @Lowerleftcoast can tell us.

The 5E3 ime does not sag much. The cathode bias of the 5E3 works against current and voltage swings. It does not sag like the fixed bias counterparts that are firmly in class AB.

To compare two different PTs for current, a fixed load could be applied and the resulting voltage measured.

The current capability has to do with wire size, length of wire, and the winding itself with the associated metal core, Henries, etc.
Last edited: Feb 24, 2021

Very interesting stuff. I'm gonna switch it out and will report back with my voltages!
D

I've been measuring to ground. This is good to know! Thank you!!

I'm feeling lazy so I'll just say if you want to know what the old circuit used for current, each tube has the cathode resistor value and the voltage at that pin. Use Ohm's Law to determine the current through the resistors. Then just add them up.

Then there is taking an unloaded voltage reading of the primary and then (with no voltage) take the resistance reading across the winding. You can compare the readings between the two transformers and if inclined use the readings in Duncan's Power supply calculator.

If the voltage is low the tube rectifier can be replaced with solid state diodes. Usually that gets hifi transformers up to guitar voltage levels.

Notable problem: The amp is humming LOUDLY. When I first built this amp it had some fairly bad hum, which I was able to mostly remedy with a floating heater center tap and grounding the high voltage center tap to the board. I didn't wire this one up that way but will tinker if I decide I like the sound and want to keep it in.

In some ways the amp sounds better: warmer lows, smoother breakup. In some worse: The high end became more brittle and there is a harshness to the higher frequencies in the breakup that I don't like. I'm going to put some different rectifiers in to see if I can find a middle ground.

I don't have any other 5y3 that will give a different B+ so that's about all I can try. My conclusion is that the transformer just doesn't sound that great regardless of B+.
Last edited: Feb 24, 2021

I'm going to put the ClassicTone back in and call this a good lesson for me in understanding that B+ isn't everything. This was a pretty fun little experiment and I'm glad I did it.

I don't have any other 5y3 that will give a different B+ so that's about all I can try. My conclusion is that the transformer just doesn't sound that great regardless of B+.
Click to expand...

You should be doing a bias check with each of these changes and probably adjusting your cathode resistor value to get similar dissipation in order to make a fair comparison. That transformer probably sounds bad because at those lower voltages the bias is colder than it was with the original PT.

Just out of interest did you check what ac voltage you got for the 6.3v filament supply under load and no load?

Running 4 tubes instead of the 10 it was designed for would half the current draw so reduce the voltage drop. Should still be within 10% even with the 120v ac supply.

Ronno25 said:
I'm going to put the ClassicTone back in and call this a good lesson for me in understanding that B+ isn't everything. This was a pretty fun little experiment and I'm glad I did it.
Click to expand...

I know a guy who has a huge collection of different rectifier tubes and swaps 'em around to change B+ and bias. Being lazy and liking instant gratification, I built a version of Rob's bucking transformer... it can switch my supply voltage, on the fly, between ~120, ~114, and ~108. My tweeds really like the 114, and the slightly lower B+ does indeed make 'em warmer and sweeter. Oh, and you say your 5E3 gets raspy in the highs? World's simplest mod, a 470K PI grid stop, often fixes that fast... 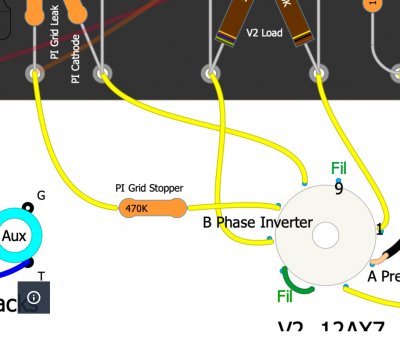 dougsta said:
Just out of interest did you check what ac voltage you got for the 6.3v filament supply under load and no load?
Click to expand...

Right now under load I'm getting 5.18VAC on rectifier and 6.9VAC on filaments.

Here are my calculations for how the amp is biased. Hopefully I did the calculation right.

Now to figure out this incredibly loud 120hz hum.