Wow, quite an event this week. Paid a visit to my hometown, which is rare since my parents moved away to Florida about 10 years ago. Made plans to see an old friend, who I had once played with in a band way back 30 years ago when we were in our 20s. We agreed maybe we'd try to hit a local open mic and try to do something together. Like me, he had stopped playing for decades, but picked it back up again in recent years. Another old friend, who had also played in that band, said he had other plans but would try to get to the open mic before it was over. My friend and I got together in the afternoon and honestly had a terrible time coming up with ideas for songs we both still knew and were easy enough for fill-in players to follow along with at the open mic. So we had to downgrade our expectations quite a bit.

That night the two of us show up at the open mic, and a third old friend happens to be there, who still lives in town and, you guessed it, had also been in that old band of ours (the drummer). He says, "Guess what, Rich is in town and might stop by." Rich played bass and piano in that old band, who decades ago moved to Nashville. He is an elite piano player and has worked as a Nashville session player and touring sideman all these years. So he just coincidentally happens to be in town this same week visiting his parents. A couple minutes later, he walks in. I literally had not seen him in 30 years. Of course he offers to come up with us and play bass. Our old drummer long ago gave up drums and became a really good sax player, so he agrees to join us on sax. So that makes four.

You can all guess what happens next, right? About 5 minutes before we are about to go on, the fifth member of this band from our youth - the guy who wasn't sure if he could make it - walks in. Perfect timing. This guy is a fantastic guitar player, and has continued playing in local bands his whole life. So by some miracle, all five of us from this old band 30 years ago, half by design and half by coincidence, happen to be here in this bar the same night at the same time. It was like a corny scene in some cheesy movie!

We went up and did 3 songs (we had a fill-in drummer). It was a little rocky, but not too embarrassing. But mostly it was just astonishing. To be suddenly transported back 30 years, almost without warning, with these people who for me had been frozen in time. It was like no time had passed. And it was the most fun I have had in a long, long time. We hung out all night long, and actually bumped into several other people I had literally not seen since high school (I am 57!). I am really, really glad this turned out the way it did, and it's a great memory I will never forget. 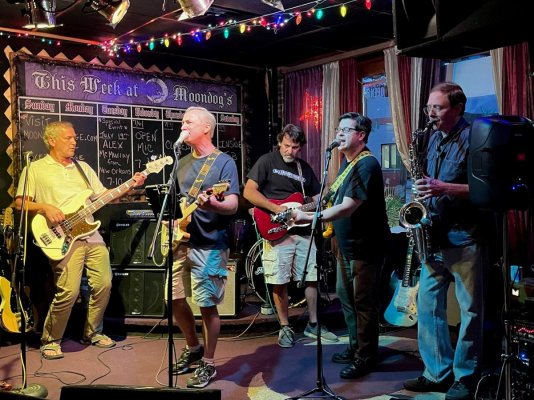 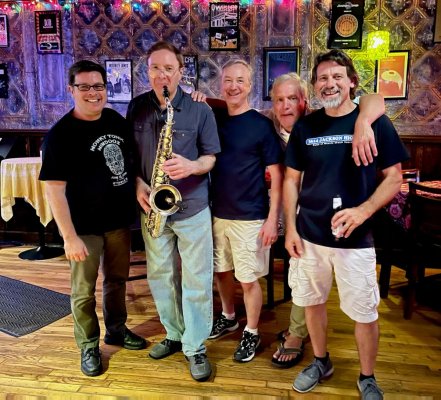 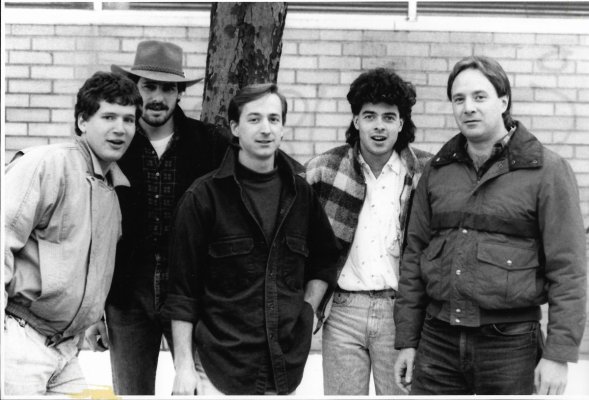 Cool!
There’s one of my old bands I’d love to get back together.
Alas, it’s utterly impossible.
Good on y’all for doing it!

. What a great time and memories.

What?! No cargo shorts in the bottom photo?!

… you cannot make this stuff up – just way too much

Joefish said:
( … forgive me for creeping … but it appears that bar is near Pittsburgh … I grew up down the road from the old airport in Moon – moved away in 68)
Click to expand...

That is very cool! A friend I played with in a trio about 30 years ago wants us to get back together for one gig. I’m the one who’ll be rocky because I haven’t played with anybody for two years. I’ll do it anyway!

Congrats!!! That’s a great surprise situation and story. Nice that you also got some photos of the surprise reunion to go with those from the past. Thanks for sharing.

Once in a lifetime occurrence. Sounds like it was fun!

That's a cool story. Glad you had a great time.

It didn’t hurt that the open mic was expertly run. The host band is great, sound/acoustics are great, and this particular bar is the hub for local musicians and live music fans.

... and in the background, I hear Springsteen's "Glory Days" playing ...

What a great story

Happy Enchilada said:
... and in the background, I hear Springsteen's "Glory Days" playing ...
Click to expand...

Haha, not quite. But we did do a Springsteen song: From Small Things Big Things Come (a rarity).

What a fantastic story. Sounds like an unforgettable night.

truly a gift to have such an alignment of the stars - love it!
now where's the video/live music recording?
You must log in or register to reply here.

First Concert in a while...

Been doing some catching up after wrist injury, and long hot summer.

Some Things Are Lost and Can Never Be Returned